The Howitzer (known as the GL3 in pre-release) is a grenade launcher featured in Call of Duty: Infinite Warfare.

The Howitzer is unlocked at level 50.

The March 10th, 2017 patch increased the explosion radius and the damage dealt to scorestreaks, as well as bolstering the damage reliability within the radius of effect of the Howitzer.[1]

The Howitzer in first person 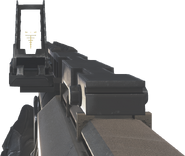 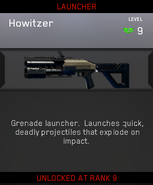 The Howitzer being unlocked in Zombies

Retrieved from "https://callofduty.fandom.com/wiki/Howitzer_(launcher)?oldid=2507508"
Community content is available under CC-BY-SA unless otherwise noted.