"This big game hunting lodge is situated beneath a waterfall in the lush mountains of Ethiopia, where rugged terrain opens up to long sightlines and a stealthy underwater pathway."
— Map description

Hunted is a multiplayer map in Call of Duty: Black Ops III. The map takes place in the Nile River region in Ethiopia.

There are small paths leading to where close-quarters weapons dominate. There is a ledge usable for snipers, however it is small and really only useful for moving. There is a water pathway in the middle of the map with a downfall which, like other maps, results in instant death. In the river there is a square in the wall where a player can swim up to a building and serves as an entry way to the water also.

Uplink gameplay in the map.
Add a photo to this gallery 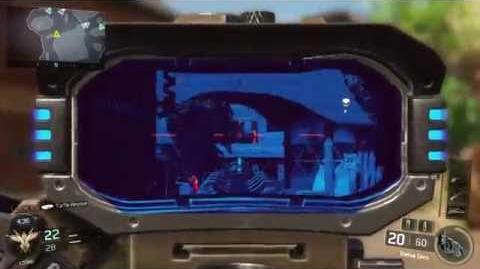 Retrieved from "https://callofduty.fandom.com/wiki/Hunted_(Black_Ops_III)?oldid=2516761"
Community content is available under CC-BY-SA unless otherwise noted.