The unit first appears in Afghanistan where it helps train Afghan recruits and participates in an operation to help BCT-One. The unit is then transferred back to the U.S. where they play a major role in the defense of America from the Russian Invasion. They arguably play the largest role in the defense of Washington D.C., clearing buildings such as the Department of Commerce and stopping the Hammerdown Protocol from destroying the city. The unit is last seen questioning when they will be able to take their revenge on the Russians for devastating their country.

Sergeant Foley, the leader of Hunter 2-1 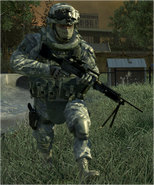 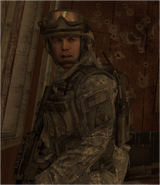 Allen's Tattoo
Add a photo to this gallery

Retrieved from "https://callofduty.fandom.com/wiki/Hunter_Two-One?oldid=2467136"
Community content is available under CC-BY-SA unless otherwise noted.