Festung Recogne
Hurtgen is a multiplayer map in Call of Duty and Call of Duty: United Offensive. It is based on the campaign level "Hurtgen". This map is set in the Hurtgen Forest, which has a plentiful amount of trees. Some trees have fallen and players can climb on them for a height advantage. It is a very wide open map with very long sight lines, making it a popular map for snipers. The map is surrounded by minefields, so be careful when roaming near the edge of the map. There are also large concrete casemate bunkers, some with usable MG42s. The German faction is favoured for this map, as their uniform is white, which blends in with the bountiful snow and fog, especially when prone. The American faction's uniform is dark green, which is more conspicuous, especially when a German sniper is lying in wait, scanning the area. 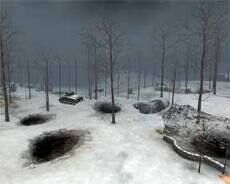 The open terrain of Hurtgen.