For other uses, see Hybrid.

The Hybrid Sight is attached to Kevin Sparks' M4A1 in Dead for a Day.

Sparks holding an M4A1 with a Hybrid Sight

The Hybrid Sight attaches a Holographic Sight and a magnifier; it was first seen attached to the M4A1 in the E3 trailer. The magnifier can flip from the right side to the top of the weapon on the fly, allowing for versatile aiming that can be adapted to different combat situations. To prevent people from using the Holographic Sight exclusively, both scopes are brought up slower, with the magnifier having a slower ADS than the ACOG Scope, along with slightly increased weapon sway. The magnifier is activated and deactivated by using the control for the first equipment item (left D-pad for consoles, key 3 on PC). However, as this is the same control to ready an underbarrel attachment, the Hybrid Sight cannot be used in conjunction with one. (This issue is fixed in Black Ops 2, where the button to toggle the hybrid sight is now activated by clicking on one of the analog sticks, allowing the left D-pad button open for launchers.)

The Hybrid Sight makes three appearances in the campaign, all three times being part of the player's starting loadout being used by Frost and Yuri. In "Black Tuesday", the player has an M4A1 with a Hybrid Sight attached, while it is attached to the ACR 6.8 in "Scorched Earth". The third appearance is a unique sniper rifle version in "Eye of the Storm" attached to the RSASS used by Yuri. Interestingly the scope is fixed on top of the gun while the red dot sight is fixed to the left side, this means the gun has to be turned on its side when using the red dot sight.

The M4A1 with which player(s) begin Fatal Extraction and Flood the Market will always have a Hybrid Sight.

The Hybrid Sight is also present in multiplayer, available exclusively for all of the Assault Rifles. It has a 1.2x zoom without the magnifier and a 2.4x zoom with the magnifier, contrary to the in-game description. The Hybrid Sight is most effective on Assault Rifles with controllable recoil and good range, such as the ACR 6.8 or the G36C, as player can ensure that their bullets make their mark. SMGs can mount a similar sight called the HAMR. The HAMR has a much faster switch between the two reticles, and is much less obstructive when using the scope, however, the HAMR's Red Dot is half of the normal size.

Because the Hybrid Sight provides both a low-zoom optic and a high-zoom optic simultaneously, players using it can more easily engage enemies at a wider variety of distances.

The Hybrid Sight has a slower ADS time compared to the standalone ACOG, although Quickdraw may partially remedy this effect. Users also must swap between appropriate sights at the right time, or else they could be left using the wrong scope at the wrong time. The act of having to flip the magnifier between the two optics might put users at a disadvantage compared to enemies with weapons that have simpler one-zoom optics. Also, the Hybrid Sight will obstruct more of the user's peripheral vison with both magnifications, due to the large size of the magnifier. With the MK14, the Hybrid Sight allows the player to push the rifle into a mid-range DMR like role, however, the ACOG Scope would be better suited for this task. The Hybrid Sight also dramatically increases the view bobbing of any weapon it is applied to, regardless what sight is being aimed through.

An ACR 6.8 with the Hybrid Sight attachment

The Hybrid Sight in use.

Aiming down the Hybrid Sight without the scope.

The player putting down the Hybrid Sight.

The Hybrid Sight as it appears in third person

The unique Hybrid Sight found on Yuri's RSASS in "Eye of the Storm".

"Integrated Hybrid Sight that toggles between SMG and AR combat modes."
— Part of the Ripper's description

While several hybrid optics appear in Call of Duty: Ghosts, the Hybrid Sight itself appears as an integrated attachment into the Ripper weapon from the Devastation DLC. Toggling the sight (done in a similar manner to the Tracker Sight) changes the gun between SMG and AR mode, where the SMG sight acts as a traditional iron sight, and the AR sight has an electronic interface.

The AK12 with a Hybrid Sight in higher zoom level 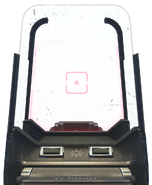 Aiming with the higher zoom level

The ASM1 with a Hybrid Sight in lower zoom level

Aiming with the lower zoom level

While several hybrid optics appear in Call of Duty: Infinite Warfare, the Hybrid Sight itself appears as an integrated attachment into the RPR Evo/Ripper weapon in a identical way akin to Call of Duty: Ghosts. Toggling the sight (Hold Y/Triangle) changes the gun between SMG and AR mode, where the SMG sight acts as a traditional iron sight, and the AR sight has an electronic interface.

The attachment appears in Call of Duty: Modern Warfare as the 4.0 Flip Hybrid. It is present alongside the Integral Hybrid, Canted Hybrid and Thermal Hybrid sights.