Call of Duty Wiki
Register
Don't have an account?
Sign In
Advertisement
in: Call of Duty: Modern Warfare 3 Characters, Animals

A hyena is featured in Modern Warfare and Warzone as a Legendary Finishing Move called "Sputnik" featured in the "No Prisoner" bundle pack for the Operator Nikto, released on June 29th, 2020. Once purchased, the finishing move is available to all Allegiance and Coalition operators. 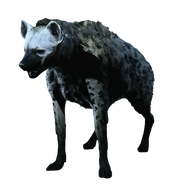