The Hyena is a type of attack animal featured in Call of Duty: Modern Warfare 3. Hyenas appear in Special Ops and the campaign as attack animals, similar to Dogs. They are used by the Africa Militia. 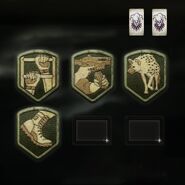 Hyena featured on a perk patch in a Black Ops 4 teaser.
Add a photo to this gallery

Retrieved from "https://callofduty.fandom.com/wiki/Hyena?oldid=2476370"
Community content is available under CC-BY-SA unless otherwise noted.