Call of Duty Wiki
Register
Don't have an account?
Sign In
Advertisement
in: Call of Duty: Ghosts Marksman Rifles

The IA-2 (referred to as IMBEL IA2 in the game files) is a marksman rifle that appears in Call of Duty: Ghosts.

The IA-2 appears in the campaign mission "Federation Day" with an ACOG Scope and Silencer attached.

The IA-2 can be purchased with 8 Squad Points, being one of the most costly Marksman Rifles, just under that of the SVU. It plays a similar role to the MK14 EBR, having the same magazine size at 18 rounds, a slightly higher rate of fire, along with slightly less range and accuracy. Also, just like the other Marksman Rifles (except for the SVU), it will kill in two shots out to medium range, and three beyond that. This allows any barrel attachment to be effective on this weapon. Its default scope is bulkier when aiming compared to the MK14 and MR-28's scope, but is far less obstructive than the SVU's. The iron sights can be used for increased versatility in close range engagements, but other optics (such as a Red Dot Sight ) will allow better overall targeting of enemies at any range. Overall, it is a useful Marksman Rifle that can be used in nearly any situation.

Like other Marksman Rifles, the IA-2 has 15% less recoil when using the default scope.

The IA-2 also makes an appearance in Extinction, in Point of Contact and Awakening. It can be bought for $2000. It is in the city, located across from the small fort. The IA-2 is a much more traditional Marksman Rifle in Extinction than the MR-28, possessing a much larger magazine capacity and ammo loadout. The IA-2's larger ammo characteristics make it much more palatable for use against Scouts compared to the MR-28, which can fall in one shot to the IA-2 with enough damage buffs. The IA-2 is not powerful enough to justify the sluggish handling characteristics, as it is too similar damage-wise to the SC-2010, a weapon which can be purchased much earlier and possesses far superior accuracy and handling characteristics, in addition to more ammo and the ability to equip a Grip. The IA-2 is far weaker on a per-shot basis than the MR-28, a weapon that can, with enough damage buffs, instantly kill Scouts, in addition to instantly killing Hunters and Scorpions in some situations, something the IA-2 is completely incapable of. Better semi-automatic options exist to use over the IA-2 on Point of Contact, but neither of those two weapons are available in Awakening, giving the IA-2 more of a niche on that map.

The IA-2 in first-person view

The IA-2 equipped with an iron sight 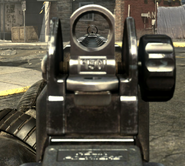 Aiming down the iron sight

A render of the IA-2's model

Keegan wielding an IA-2 with a Silencer equipped