For another variant, see ICR-7.
For similarly named items, see ICU and ACR.

The ICR-1 can be commonly found around the campaign.

The ICR-1 is a low-damage-per-bullet assault rifle. At most ranges, the ICR-1 will take either four to five shots to kill. This is low for the assault rifle class, and is tied with the HVK-30 and M8A7 for the lowest damage per shot in its class. Unlike the HVK-30, the ICR-1 also possesses an average fire rate, making the ICR-1's time-to-kill ratio quite slow. The ICR-1 has medium penetration, and in Hardcore game modes, the ICR-1 is generally hit-or-miss in terms of one shot kills. Its one shot kill range is good at best, and won't match weapons like the XR-2, Man-O-War, or the M8A7 in terms of lethality.

The ICR-1's fire rate, as already stated, is average for its class. The ICR-1 will fire at 600 RPM. This rate of fire is slow overall, but for the assault rifle class, it is quite good, and is only outdone by the HVK-30 and just barely by the KN-44 in terms of overall fire rate. Due to its low rate of fire, this makes the ICR-1 have a long time-to-kill ratio in comparison to other assault rifles.

The ICR-1's selling point is its extreme accuracy. The ICR-1 has good iron sights, and the recoil per shot is very low, as the weapon kicks both minimally and predictably and, due to the average rate of fire, allows the center-speed to counteract a lot of the recoil.

The ICR-1 has a 30 round magazine capacity, which is standard for the assault rifle class. Due to the ICR-1's low damage, reloads may be more frequent. However, the slower fire rate may also help alleviate this somewhat.

The ICR-1 has the standard assortment of attachments in its class available to it. The optical attachments are worth considering, as some players might not like the iron sights due to the somewhat large rear sight. Optics can give better clarity of targets making target acquisition and focusing on targets easier.

The magazine modifying attachments, Extended Mag and Fast Mag, are well worth considering. The ICR-1 uses a lot of ammunition due to its lower damage per shot. The default reload time is already fairly fast, at just over two seconds, which makes Extended Mag a much more valuable option.

The Adjustable Stock and Quickdraw Handle are good options for the ICR-1, which fits best as a medium range assault rifle. With these two attachments, its performance increases, allowing the user to aim quickly and avoid incoming fire easier.

The Laser Sight is a good attachment to consider, as it makes the ICR-1 more accurate when firing from the hip. The ICR-1 is one of the more forgiving assault rifles to fire from the hip thanks to its rate of fire, making the ICR-1 quite workable in close quarters. The Suppressor will cut down severely on the ICR-1's four shot kill range; however, due to the ICR-1's rate of fire, lower damage per bullet, and low damage differential, the ICR-1 is one of the best Assault Rifles to use a Suppressor with. The user is always at risk of losing a straight gunfight by a matter of one bullet, due to the ICR-1's low damage per shot. If the player can use the suppressor properly, the player will be able to easily take enemies by surprise, while not sacrificing too much in the form of power.

The ICR-1 appears in Zombies, where it can be obtained from the Mystery Box as well as a wall buy in Verrückt, Zetsubou No Shima, Kino Der Toten, Origins and Gorod Krovi for 1500 points. It sports itself as an above average wall weapon, featuring a stable fire rate, dependable damage and a reliable accuracy.

When upgraded via the Pack-a-Punch Machine, it becomes the Illuminated Deanimator, which has increased damage, more reserve ammo, and a larger magazine capacity.

The ICR-1 in first person 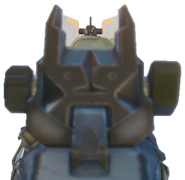 Chambering a round into the weapon

30 rounds
(40 and 50 rounds with ammunition attachments)

The ICR-1 returns in Call of Duty: Mobile. It was added as part of the Season 2 update.

It features average damage, quick reload speed, and high accuracy from Black Ops III, but unlike the Black Ops III version, it has a wider hipfire spread. Due to the Gunsmith being implemented into Call of Duty: Mobile, it has a wider variety of attachments than its original counterpart, thus allowing for better customization. For example, with the right attachments one can massively increase ADS speed or almost completely negate recoil, an unusual aspect among guns in Call of Duty: Mobile. Due to its quick reload speed and decent handling it is best to choose a build that increases ammo capacity or reduces recoil.

The gun is available in Battle Royale mode since Season 9. It features average damage, very fast reload speed and good accuracy. Its damage drop off is very low, allowing it to outgun other ARs at range. It also has very low recoil: there is barely any recoil at all. The ICR-1 comes as Common and Epic blueprints, while the Legendary one is only available in Airdrops.