"They care. They care for their own interests. Nothing more."
— ISI Leader on the Pakistani government.

The ISI Leader is a high-ranking officer of the Inter-Services Intelligence, located in Pakistan in 2025. He appears in the mission "Fallen Angel", speaking with Raul Menendez in Lahore, Pakistan. Section and Harper attempt to scan the conversations he and Menendez have regarding drones. They make their way underneath the floor Menendez and the ISI Leader are under, but Menendez knew about their presence all along and they were almost killed by grenades. Menendez and the ISI Leader are then presumably transported to safer locations while the ISI soldiers attempt to kill Section and Harper. 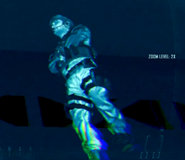 The ISI Leader, as seen through Section's scanner.