"Meet Ilona, a member of the Sentinel Task Force. Cool and aloof, Ilona is not much for conversation and she doesn't need to be - her skills as a Tier One operator do the talking for her. Trained as a sniper in the Russian Spetsnaz Special Forces, she now uses her exceptional abilities for the ATLAS Corporation."
— Ilona description on the official Call of Duty website

Ilona (Russian: Илона) is a character featured in Call of Duty: Advanced Warfare as tritagonist, and a hero available in Call of Duty: Heroes. A sniper trained by the Spetsnaz, Ilona puts her skills to use under employment by the Atlas Corporation.

Not much is known about Ilona before she joined Atlas, other than she used to be a sniper for Spetsnaz.

When Mitchell joins Atlas, Ilona is training at the shooting range in the Atlas HQ building before leaving, as Mitchell and Gideon arrive so Mitchell can train.

Ilona later interrogates Dr. Pierre Danois, after he is captured in Detroit by Mitchell, Gideon and Joker, in order to find out where Hades is. Ilona manages to get information about Hades out of Danois and pinpoints Hades location in Santorini, Greece, where Hades is meeting with his top financial advisors.

Ilona along with Mitchell sit in a cafe in Santorini, where Mitchell tracks the movements of a KVA key man in order to locate Hades, the leader of the KVA terrorist group, who organized a meeting in the area. While Mitchell is in a WASP, a sniping drone, he gets the necessary intel and shoots Hades, only to figure it is a double and Gideon's team is led into a trap. Both Mitchell and Ilona decide to plant bombs on the convoy's way. As they attempt to drag Hades out of his vehicle, a KVA SUV arrives and attempt to run over Mitchell, only to get him stuck behind the car. Ilona then engages in a fight with Hades, only to be saved by Mitchell who succeeded to grab a knife and stab him in the throat. Shortly before dying, Hades said "Irons knows." and gives Mitchell a data chip before dying before Mitchell hands it to Ilona.

Escape from Atlas with Mitchell

Ilona then proceeds to analyze the chip and discovers that Jonathan Irons executed the Technologist that Mitchell and Gideon previously saved in Nigeria after he warned Irons about the KVA's intention to attack nuclear plants around the world, a warning Irons ignored, proving that Irons deliberately allowed the attacks to occur in order to improve Atlas' reputation. As Ilona calls Mitchell and Gideon to show them her discovery, Atlas men arrive in the room and put both Mitchell and Ilona under arrest. However, Mitchell succeeds to kill one of the guards, take his gun and kills the second one before he could kill her. Mitchell and Ilona then escape the city, as they are guided by an anonymous man, who turns out to be Cormack, a U.S. Marine and former squad mate of Mitchell, who now leads the Sentinel Task Force, a U.S.-led multinational special ops team. As Mitchell and Ilona leave Atlas, they decide to join Cormack and the group starts initiating ops against Atlas.

Mitchell and Ilona's first mission with the Sentinel Task Force is assisting Cormack and Knox infiltrate Irons' private estate in Bangkok, Thailand, to recover intel on mysterious Atlas operation called "Manticore". They find out that Manticore is a biological agent that does not affect the DNA of people on Atlas' databases. A large shipment of Manticore, created by Pierre Danois, is headed out for Argentina, but Sentinel manages to down the cargo plane over Antarctica and secure the cargo. During the process, Mitchell, Ilona and Cormack are captured by an Atlas squad under the command of Gideon, but Gideon betrays his Atlas comrades, saves the three and helps them recover a sample of the Manticore cargo. Gideon then joins the Sentinel Task Force.

Later, Ilona, along with Mitchell, Cormack, Gideon, and Knox are part of the Sentinels' attack on New Baghdad, in an attempt to arrest Irons. However, Atlas triggers a Manticore attack in downtown, which does not affect Mitchell, Ilona and Gideon, due to their past as Atlas soldiers and were thus inoculated, and Cormack was out of the attack's area of effect. They are, however, captured by Atlas forces as Irons makes a victory speech to his soldiers and to the citizens of New Baghdad.

All four are brought to a Atlas prison camp, where Mitchell loses control of his prosthetic arm after Irons smashed it, and Cormack is heavily wounded by a gunshot to the leg. Ilona and Gideon succeed in killing the two guards protecting the cell, and proceed to rescue Mitchell and Cormack. During the level, a blast door splits the group, Ilona being forced to escape with the wounded Cormack while Gideon and Mitchell proceed to wipe out most of the guards. Ilona seize control of a truck and all four escape the Atlas men. On their way to a safe point, she tries to rescue Cormack, however, due to large blood losses, he dies. Mitchell, Ilona and Gideon then swear to kill Irons and stop Manticore from being launched.

Ilona then guides Mitchell and Gideon through the Atlas Command Center, as the Sentinels attempt to stop Atlas from launching a missile full of Manticore towards the United States. The mission is successful, as both Mitchell and Gideon succeed to prevent the launch, and Mitchell manages to kill Irons.

She also appears in Call of Duty: Heroes added in the 23rd of March, 2015 update, she can be purchased for 850

Ilona at the shooting range in Atlas.

Ilona about to jump.

Ilona with Gideon and Mitchell in Captured. 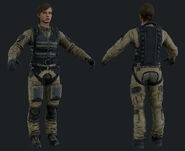 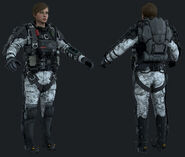 Ilona pinning Pierre Danois to the table during his interrogation.