Imran Zakhaev (Russian: Имран Захаев) was a Russian arms dealer, revolutionary and Ultranationalist terrorist leader who is the main antagonist of Call of Duty 4: Modern Warfare and Call of Duty: Modern Warfare Remastered. He is the leader of the Ultranationalist Party and "Four Horsemen", father of Victor Zakhaev and the cunning mastermind behind the uprisings in Russia and the Arabian Peninsula. He survived an assassination attempt by a younger John Price which he lost his left arm. He was shot through the head and killed by John "Soap" MacTavish in the level, "Game Over". It was through Zakhaev's lasting machinations and ideals that the catastrophes of World War III occurred in 2016, five years after his own death. He was also featured in the DLC for Call of Duty: Ghosts called the Legend Pack.

Zakhaev was born to an unknown father and mother during the reign of the Soviet Union. He believed in the Soviet Union's ideals and goals. This belief is what would drive him in his goals in his later years.

Sometime either in 1971 or 1972, he had a son whom he named Victor Zakhaev. Zakhaev loved his son, even going so far to make him a field commander in his paramilitary faction later on in life. He made his living by being a black-market arms dealer, a position wherein he made a lot of money.

In 1996, fifteen years before the Second Russian Civil War, Zakhaev witnessed the collapse of the Communist regime in the Soviet Union as an opportunity to salvage the radioactive fuel rods from the Chernobyl nuclear power plant in Pripyat, Ukraine and sell the precious uranium as nuclear material on the black market.[2] Through the profits that he gained from these dealings, Zakhaev planned to fund his own extremist military faction that would regain control of Russia and restore its Soviet-era regime.

His criminal activities are noted by the British intelligence and the Special Air Service received its first assassination order since the ending of World War II. The SAS dispatched two operatives, Captain MacMillan and Lieutenant John Price to Pripyat as snipers to eliminate Zakhaev. Pripyat which was an abandoned ghost town since the 1986 Chernobyl disaster and the peaceful countryside that was surrounding the town are swarming with Russian mercenaries that are employed by Zakhaev. However, MacMillan and Price who are wearing ghillie suits are able to sneak into the city unnoticed. Three days later, shooting from 896.7 meters away with his Barrett M82 sniper rifle, Price shot Zakhaev in the left shoulder when his target was meeting business partners near the Chernobyl power plant.[3] The Russian mercenaries attempted to eliminate the intruders, but MacMillan and Price are able to escape from Pripyat successfully. MacMillan believed that Zakhaev would die from "shock and blood loss," but this was not the case. Zakhaev survived after being driven away to safety by Vladimir Makarov and Yuri (As it was revealed in Call of Duty: Modern Warfare 3), but the failed assassination attempt cost Zakhaev his left arm.

Fifteen years later, in 2011, Zakhaev became the chairman of the Russian Ultranationalist Party. In his opinion, the current Russian government "prostituted" his beloved homeland to the West, ruining their economy, their culture and their honor of the country in the process. Harboring a strong and keen hatred of the Western countries, Zakhaev sought to return Russia to its "prime", possibly seeking to return it to its condition before the Soviet Union collapsed with himself in power. To topple the current Russian government, Zakhaev took the next step in his plan and the Ultranationalist Party waged a political crisis that escalated into a civil war in Russia. The Ultranationalist troops are supported by the old Soviet-era vehicles including the BM-21 rocket artillery, BMP-2 infantry fighting vehicles and Mi-24 helicopter gunships and the field commander of the Ultranationalist forces was Zakhaev's son, Victor. The Second Russian Civil War became critical to world peace as it became clear that if the Ultranationalists would win, Zakhaev would have unlimited access to the entire Russian nuclear weapons arsenal including over 15,000 active nuclear warheads.[4] However, his plan to overthrow the government met heavy resistance from the Russian military units that are loyal to the current Russian government.

Imran Zakhaev understood that his plan would never work because the civil war would draw the attention of the United States and United Kingdom who supported the current Russian government. However, Zakhaev had an influential and political ally in the Middle East which was military commander Khaled Al-Asad. Zakhaev contacted Al-Asad and funded and masterminded a military coup which President Yasir Al-Fulani was overthrown by the soldiers that are loyal to Al-Asad. Zakhaev and his son took part in the coup in the Arabian Peninsula. Viktor Zakhaev was in the car that transported President Al-Fulani to the arena where he was executed and Zakhaev himself witnessed Al-Fulani's execution.[5] In fact, it was Zakhaev who gave Al-Asad the Desert Eagle that was used to execute Al-Fulani on national television. Al-Asad assumed control of his homeland, causing political instability in the Middle East and leading the United States Marine Corps to invade the country and the capital city of Al-Asad's homeland was under attack by the U.S. forces. However, Al-Asad detonated a Russian-made nuclear bomb on Vladimir Makarov's orders (as it was revealed in Call of Duty: Modern Warfare 3), leveling the city and destroying the invading enemy force. Before the American invasion, Al-Asad already took refuge in Azerbaijan where he was protected by Zakhaev's Ultranationalist forces.[6] However, the SAS operatives led by John Price, now a captain, captured and interrogated Al-Asad, executing him shortly afterward. The evidence that was gathered by the SAS revealed that Zakhaev provided Al-Asad with the nuclear weapon that was detonated in the Arabian Peninsula. It also revealed that he was the mastermind responsible for everything in the Middle East.

When the United Kingdom and United States understood that Zakhaev planned to divert the attention of both countries from the Second Russian Civil War, the Special Air Service and United States Marine Corps were ordered to locate and capture Victor Zakhaev in order to persuade him to reveal the location of his father. However, the operation failed when Viktor committed suicide unable to face capture.[7] Deeply affected by the death of his son, Imran demanded "All US and British forces would leave Russia immediately or suffer from the consequences" by launching the ICBMs from a missile silo that was captured by Ultranationalist forces from the Loyalists. But, the SAS and Marine Force Reconnaissance operatives were dispatched to Central Russia to deactivate the nuclear warheads in the silo.[8] Zakhaev launched two RT-2UTTH Topol-M ballistic missiles to the eight largest cities on the East Coast of the United States: Boston, Hartford, New York, Philadelphia, Baltimore, Washington D.C., Richmond and Norfolk.[9] Since the missiles carried multiple independent nuclear warheads, it was estimated that the nuclear holocaust on US soil would kill over 41 million US citizens. However, the SAS and Force Reconnaissance operatives were able to secure the silo and deactivate all nuclear warheads before they got to the US.[10] After the warheads were deactivated, Zakhaev and a few of his bodyguards escaped from the launch facility in a helicopter. 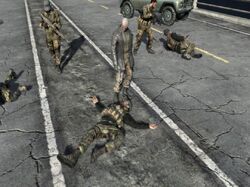 The SAS and Force Reconnaissance operatives attempted to flee from the silo, but the bridge that was crucial to their escape was destroyed by an Ultranationalist Mi-24 helicopter. During the firefight on the bridge, Staff Sergeant Griggs of the Force Reconnaissance was killed by the Ultranationalists while attempting to save Soap. Zakhaev and his bodyguards arrived at the scene. Zakhaev personally executed an SAS operative named Gaz and his bodyguards shot the other two SAS commandos and he moved to kill John Price and John "Soap" MacTavish.

Following Zakhaev's death, it was announced that the Ultranationalist Party began developing leadership struggles. It was revealed that a schism split the group in two with Vladimir Makarov, a 'wild dog', forming a violent terrorist group and Boris Vorshevsky becoming the legitimate President of Russia at the head of a politically stable Ultranationalist Party.[11]

Five years following his death in 2016, Imran Zakhaev was revealed to have a statue of himself erected in Moscow, Russia with a plaque entitled "Imran Zakhaev, Hero of the New Russia" by Vladimir Makarov.[12] He also had an airport named after him in his honor, later to be the target of a terrorist attack. By this point, it appeared that the Ultranationalists were successful in gaining strong sympathy from the Russian populace in five years after his death, gaining a political stronghold in Russia rather than a military one. Imran's death deeply affected Makarov who vowed to kill Soap and Price for the death of his friend and mentor. He also had photographs of Gaz, Griggs, Soap, and Price in his hideout blaming them for Zakhaev's death. 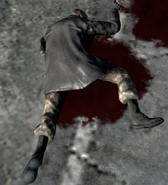 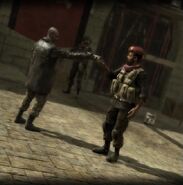 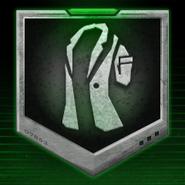