Described as a "Cold War Hero", Imran Zakhaev was a high-ranking official in the Interior Ministry of the Soviet Union. As such, Zakhaev had access to tunnels, bunker systems but also underground barracks, shelters and silos across the Eastern Bloc.

Imran had high expectations and valued education, insisting his middle son, Victor, to be fluent in Italian, German, English and French. Victor enrolled into a prestigious preparatory school in Verdansk, Kastovia, but was soon expelled following an altercation with a teacher for grabbing the teacher's cane and breaking it to evade his corporal punishment. As a punishment, Imran sent Victor to the Suvo Military School, where his peers were the more austere families of Soviet military personnel.

Attack on the Lubyanka

On March 9th, 1981, Zakhaev, along with Lev Kravchenko, Dimitri Belikov and various other Soviet officials were gathered at a meeting within the KGB headquarters led by Mikhail Gorbachev to discuss a traitor within the KGB. During this meeting, Zakhaev revealed to those during the meeting that he, at the behest of Gorbachev, had access to bunker keys restricted to only General Charkov and that he had ordered the other bunker keys collected. He would later encounter two disguised CIA operatives, Russell Adler and "Bell", in an elevator on the way to a meeting with Commander Sobol. He asked when they had arrived to the base, and which commander they reported to.

"Why I have an appointment with him now! I'll give him your regards."
— Zakhaev

Bell informed Zakhaev that they and their comrade answered to Commander Sobol, to which Zakhaev lightheartedly said that he would give his regards to Sobol, as he was just heading to a meeting with him.

Bell informed Zakhaev whom they were reporting to. However, Zakhaev recognized that the two were lying and pulled a pistol out, pistol whipping Adler and holding Bell at gunpoint. However, Bell was able to push Imran back, with Adler getting up and knocking him out in the elevator.

"What are you doing?"
— Zakhaev

Rather than bothering to answer Zakhaev's question, Bell proceeded to hold Zakhaev in a headlock as Adler knocked the Soviet out in the elevator.

"In my days, violence was specific. We used stateless entities, some even branded as terrorists, to influence policy. Then I met Perseus, and found my own line. It is because of this, I give you caution, stay wise to your allies. As well as your enemies."
— Imran to Victor

The introduction of new economic and cultural freedoms in the 1980s crippled the Soviet Union as a major world power, much to Imran's dismay. He joined Perseus's cause in bringing down the West to restore the image of the Soviet Union. Imran, however, soon realized the danger of Perseus's ideas. Believing Perseus's actions would turn the world against the Soviet Union, he prevented Perseus from taking control of a facility in Verdansk, where a chemical agent called NOVA-4 was produced.

Now seeing himself as an Ultranationalist, Imran railed against the ensuing privatizations and the spreading of ownership of former state enterprises, but his work was in vain to prevent the new model from spreading across Eastern Europe. In December 1994, Imran Zakhaev underwent emergency heart bypass surgery and remained in the hospital for months. Victor claimed his father's troubles were the manifestations of a broken heart after seeing the Soviet Union fall.

At some point, Zakhaev was almost killed by John Price and MacMillan, two SAS operatives, during a mission in Pripyat. Zakhaev later passed away in 2011.[1]

Following his death, Victor grew disenchanted with modern Russia, and used the remnants of Zakhaev's Loyalist contacts to found Zakhaev Arms, hoping in doing so to gain influence and fulfill his father's unrealized dream of returning Russia to its former status. 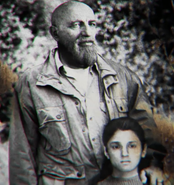 Imran and his middle son Victor. 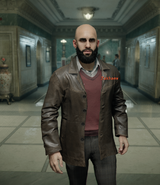 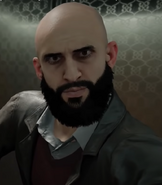