"North Korea has invaded South Korea's capital city, Seoul. On your first mission as a U.S. Marine, your squad must help to push the attackers back and reclaim the city."
— Level Description

"Induction" is the first campaign level in Call of Duty: Advanced Warfare.

Jack Mitchell, their leading sergeant Cormack, Will Irons and fellow marine Jackson are in a drop pod observing a battlefield in Seoul, South Korea during Operation Hammer Strike.[1] The pod is hit with weapons fire, and Jackson nearly falls out of the pod before Mitchell closes the blast shield and saves him. The pod then crash lands on a rooftop, and the Marines exit. They jump off of the building and use their exo boosters to land safely on the ground.

Mitchell, Irons, and Cormack regroup with their allies, who order them to reinforce a friendly demo team trying to destroy an enemy gunship up the street. They begin fighting their way forward, but are stopped by a swarm of enemy drones. Mitchell, Irons, and Cormack tear the doors off of some nearby cars to use as makeshift riot shields and make their way to a waiting vehicle. They use the vehicle's EMP ability to destroy the drones and press forward.

The group eventually reaches the demo team and discovers that they are dead. Cormack takes it upon himself to complete the mission and orders Mitchell and Irons to recover the bomb and destroy the gunship. Mitchell gets the bomb, makes his way to the gunship, and gives the bomb to Irons, who plants it.

However, the access panel closes on Irons' arm, and when Mitchell is unable to rescue him, Irons pushes him off of the gunship in order to save him. As the gunship attempts to take off, the bomb detonates, kills Irons and destroys the gunship. Mitchell is knocked away by the blast, and as he attempts to recover a stray piece of shrapnel slices into his left arm. Cormack arrives, pulls off the shrapnel, and calls for a medevac before dragging Mitchell to safety. In the process, Mitchell's arm, wounded by the shrapnel, falls off as he's being dragged away.

Cormack climbing onto crates, ready to speak to his troops.

Cormack speaking to his troops.

Cormack and his troops descending in an elevator.

US Marines heading to their drop pods.

Will Irons boarding a Drop Pod.

Drop Pods being deployed from their mothership.

The mothership getting hit by a missile.

Cormack holding onto Jackson as he is almost sucked out of the Drop Pod.

A view of Seoul after climbing out of the Drop Pod.

Mitchell using a car door to protect himself from a drone swarm.

Mitchell using a turret to destroy the drones.

A Havoc Launcher taking off.

The exterior of a subway car.

The interior of the subway car.

Atlas troops breaching the roof of a subway station.

Mitchell takes out his binoculars to have a good look at the Havoc Launcher.

A close-up of the Havoc Launcher.

The effect on an enemy soldier

Will Irons preparing the charge.

Will Irons planting the charge. 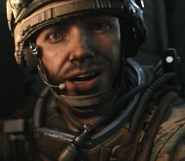 A piece of shrapnel slices into Mitchell's arm.

Cormack looking down at Mitchell, ready to drag him to safety. 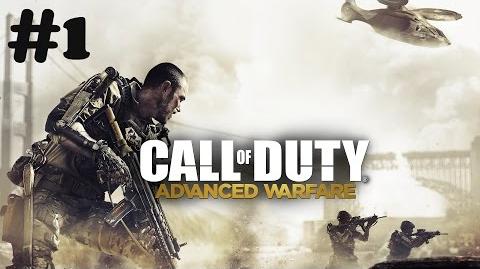 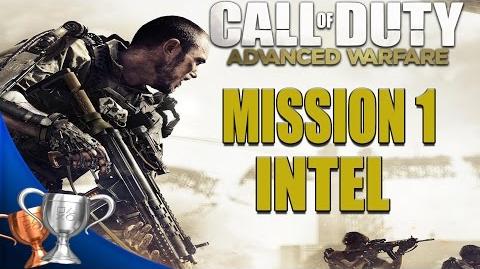