Call of Duty Wiki
Register
Don't have an account?
Sign In
Advertisement
in: Call of Duty: Black Ops Attachments

The player can purchase the attachment in multiplayer, and it is available for all assault rifles (except the G11), light machine guns, and sniper rifles. On most weapons, the scope has a reticle with a small, accurate black dot where the shots should land. There is also a different variant available on the Dragunov, AK-47 and RPK. The scope itself looks bulky and takes up most of the player's side view when not ADS. It should be noted that enemies with Ghost Pro will not be highlighted on the scope. This scope is more suited for the snipers, not the assault rifles and LMGs, because the IR increases recoil (except on the Enfield and M16) meaning that automatic fire will result in a total loss of accuracy. Becuase of the very fuzzy overlay, coupled with the scope not picking up the surrounding environment, makes the Infared Scope a very rare sight in Multiplayer, and when it is seen, it's usually on very dark maps or when the player using the scope is trying to get challenges done.

In Call of the Dead, a different variant of the Infrared Scope appears on the Hyena Infra-Dead, the Pack-a-Punched version of the Scavenger.

A standard Infrared Scope on the FAMAS

A Russian infrared scope on the Dragunov 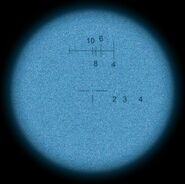 Aiming down a standard IR scope 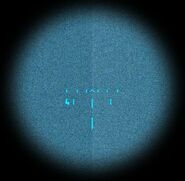 Aiming down a Russian IR scope

The whole unit visible of the Russian IR scope

The Enfield with an Infrared Scope in the campaign level "Rebirth"

The Infrared Scope seen from Call of Duty ELITE