"С нами Бог. (God is with us.)"
— Makarov at the beginning of "No Russian" and the start of a multiplayer match.

The ideals of the Inner Circle are never discussed, though they are shown to have an intensely fierce loyalty to Makarov as their visionary leader and figure. Judging from background information on Makarov being a student of Russian history who seeks to see a return to an autocratic rule like that of pre-communist Russia, as well as the presence of a royal crown in the Inner Circle's logo, it is likely the group have the overall intention to one day appoint Makarov as supreme ruler over the Russian nation and establish an empire under him that expands across all of Europe, the foundation of which they attempt to establish in Call of Duty: Modern Warfare 3. In essence, their goal would be to recreate the Russian Empire and appoint Vladimir Makarov as its ruling Tsar. This contrasts their views from the parliamentary faction of the Ultranationalists, who seem to admire the Soviet Union and adhere to some form of democratic rule.

The exact details behind the origins of the Inner Circle is left ambiguous, but they are believed to have been formed immediately after the Ultranationalist Party fell into pieces following the death of the party founder, Imran Zakhaev. While the newly appointed President Boris Vorshevsky came into power over the mainstream party, extremists of the cause fell under the charismatic Ultranationalist Makarov who took charge over them and founded the Inner Circle. The faction was used to commit various acts of terrorism against not only the new Russia under Vorshevsky, but also against the various countries of Europe to inspire fear throughout all of Eurasia. Following the massacre at Zakhaev International Airport executed by the Inner Circle, the group took a backseat role to watch the chaos unfold as Russia went to war with the United States of America. Meanwhile, a western special operations unit known as Task Force 141 made their mission to eliminate Makarov and his followers, attacking the prime safehouses of the faction at the end of Modern Warfare 2 and inflicting a large number of casualties on the organization. However, they managed to stay standing and continued their zealous campaign two months later when President Vorshevsky planned to make peace with the countries of NATO.

The group long since gained more power and support from the mainstream party due to Makarov corrupting a good deal of Russia's nationalistic politicians and top military generals into siding with him against Vorshevsky, whose move to seek peace with the west was met unpopular by the Russian population who still saw the war as a justified cause for vengeance. Effectively taking complete control of Russia and launching a coup, the Inner Circle hijacked the personal plane of President Vorshevsky while he was en route to a peace summit with NATO in Hamburg, and forced it to crash land. The faction lost a number of men in the fight against FSO forces protecting the President and his daughter, but ultimately captured Vorshevsky with the intent to force him into giving Makarov the launch codes to Russia's nuclear warheads. However, Vorshevsky refused to give him the codes, prompting Makarov to send men to capture Alena.

Makarov's plan for invasion proved to be a success, his chemical weapons devastating capitals across Europe, crippling government organizations and military command structures severely, permitting Russia to take the majority of Europe in the early moments of the invasion before meeting strong NATO resistance with United States backing. Makarov permitted his generals to handle the war while he focused on acquiring the nuclear launch codes from Vorshevsky in order to destroy the United States and end their involvement in the war, finalizing Russia's control over Europe. However, the faction's plans ultimately failed when the remnants of Task Force 141 operated in conjunction with American Delta Force operatives to rescue President Vorshevsky and his daughter from Makarov's men in Siberia. The operation was a success and the Inner Circle never gained the launch codes, allowing the President openly pursuing peace with the west once again and ending the conflict and Makarov's coup over. With his plan a failure, Makarov went into hiding with his men in the Middle East to regain their assets and plot anew. However, the score wasn't settled when the remnants of Task Force 141 pursued him, Makarov's former friend and ally Yuri and his long time enemy Captain Price assaulting the Hotel Oasis the group was hiding in to finish them off once and for all. The following conflict resulted in the deaths of the Inner Circle members present in the hotel, and while Yuri was killed by Makarov, Captain Price managed to overpower Makarov and kill him by hanging him in the atrium of the hotel from the shattered glass rooftop. It can be assumed that with the death of their charismatic leader, the Inner Circle fell into shambles and what members still survived quickly fell apart and Vorshevsky's Ultranationalists remained in power. The Loyalists also returned to Russia after Vorshevsky started reconciliation with them and offered them some key positions in the newly established Ultranationalist-Loyalist coalition government.

The Inner Circle first appears in the Call of Duty: Modern Warfare 2 campaign, then unnamed and only appearing in later missions of the game. They are first met as enemies in the mission "The Gulag" nearing and in the shower rooms. They are in the mission "Loose Ends" as the main opposition as they tried to defend their safehouse on the Georgian-Russian border. Their last appearance in Modern Warfare 2 is in "The Enemy of My Enemy" where they openly combat the forces of Shadow Company in an aircraft boneyard in Afghanistan. They also appear in the campaign for Call of Duty: Modern Warfare 3, first within the mission "Persona Non Grata", attacking the Loyalist safehouse in India, and soon after in "Turbulence", where they hijack President Boris Vorshevsky's plane and kidnap him. They also feature in "Mind the Gap" where they work to detonate Makarov's chemical weapon in London, in "Stronghold" where they attempt to defend their fortress from Price and Yuri, and lastly in "Dust to Dust" where they defend their leader Vladimir Makarov from his assassins. In this mission, they are utterly wiped out by Price and Yuri's two-man assault on the Hotel Oasis in Dubai, and Makarov himself is ultimately hanged to death by Price, marking the end of the Inner Circle.

Compared to their Vorshevsky-allied counterparts, Makarov's Inner Circle terrorists during Call of Duty: Modern Warfare 2 looked more like the roguish mercenary types depicted in the previous Modern Warfare installment, with their men donning a mixture of personal and tactical gear, but were just as capable as their counterparts in terms of vehicle support and firepower. Their equipment consists of flecktarn or blue urban camo gear, alongside a variety of headgear like bandanas, microphones, and blue berets. In the singleplayer mission "Loose Ends", and the Special Ops missions “Hidden” and “Estate Takedown”, the snipers are equipped with ghillie suits and WA2000 Sniper Rifles. The regular soldiers also wear combat pants in either dark green or with woodland camo.

In Call of Duty: Modern Warfare 3, their appearance differs, but throughout the majority of the game, Inner Circle terrorists look more like highly paid professional PMCs, wearing plain clothes, tactical clothing (tactical sweaters, olive colored or black BDU pants), upgraded armor, load bearing gear, concealed carry vests, earpieces, and in some cases sunglasses. Beyond that, it is very difficult to distinguish them from one another, though in multiplayer some will wear protective masks of an almost hockey mask-like design. In "Mind the Gap", While operating in an underground cell, they wear the uniforms of dock and ship workers, mostly consisting of navy and orange-colored jumpsuits underneath their tactical vests as well as gas masks. In "Persona Non Grata", Makarov sends Spetsnaz operatives loyal to him to deal with the Loyalists, Yuri, Soap and Price. These men appear to be very professional, wearing black combat uniforms, using advanced body armor, combat helmets, ski masks, and combat goggles. Some trade the masks and goggles for GP5 gas masks. The same variant also appear as late-wave enemies in Survival Mode, using advanced ACR 6.8 assault rifles, and they appear in the Spec Ops Mission Negotiator as hostage-takers.

An Inner circle soldier with a Dragunov. 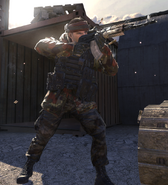 An Inner circle soldier with a AK-47.

An Inner circle sniper with a Ghillie suit and wields a WA2000. 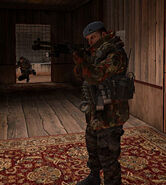 An Inner Circle soldier with a M1014. 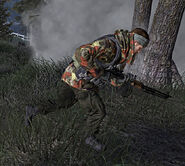 An Inner Circle soldier with an RPD. 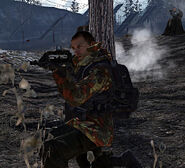 An Inner Circle soldier with a FAMAS. 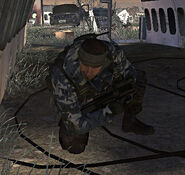 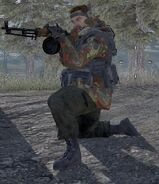 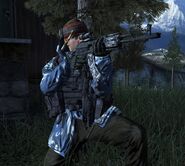 An Inner Circle soldier fighting alongside a Russian riot shield. 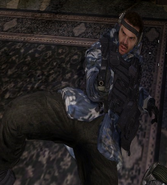 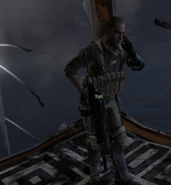 Yuri: Part of Makarov's team but reported to the FSB about Makarov. Shot and left for dead by Makarov after he betrayed him.

Inner Circle members in 'The Enemy Of My Enemy" in MW2CR 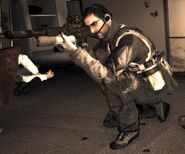 An Inner Circle hijacker in "Turbulence". 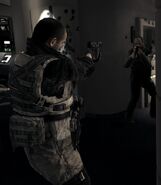 An Inner Circle member with an RPG-7 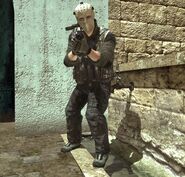 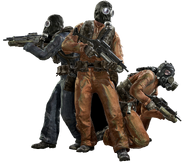 Inner Circle members in "Mind the Gap". Take note that they use the chemical agent models 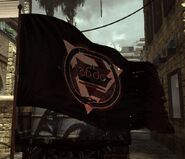 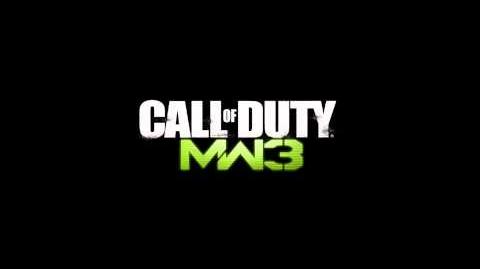 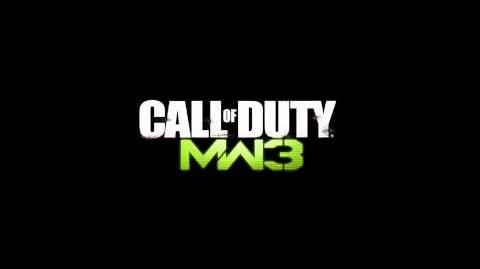