For a similar power-up in Exo Zombies, see Hyper-Damage.

"One slash to kill you!"
— Nikolai Belinski

Insta-Kill lasts for 30 seconds and enables every player to kill any zombie in one hit until the power-up runs out. Insta-Kill's icon is a skull. The Demonic Announcer will say "Insta-Kill" (except in Call of Duty: World at War version of Nacht der Untoten, where there are no voices) once someone gets it. A "vanishing" sound is heard when the power-up has expired, except in Call of Duty: Infinite Warfare Zombies. Many players prefer to use a knife or grenades when Insta-Kill is running so they do not waste ammo. The knife is also preferred because players earn 130 points (110 in Call of Duty: World at War), rather than the usual 60-100 with other weapons. If it is dropped by a dead zombie, players will try to get it once they get the chance or one player runs for it while others cover them. In Nacht der Untoten and Verrückt, the player is only given 60 points per kill, regardless if the knife was used.

While insta-kill is still active and the player throws a grenade at zombies, regardless of where it hit the zombie, it will kill the zombie with the grenade bouncing off it. Grenades, along with all explosives, are guaranteed to kill any zombie caught in the blast radius instead of creating crawlers.

In Origins, the Panzer Soldat is affected by the insta-kill, but not as a whole. It will still take the same amount of time to kill unless the player pierces the glass in front of the zombie's face. Since it is still a regular zombie, it will take damage with a hit from any weapon as long as it hits the zombie's head in the suit. Brutus and the Brute are also affected by this, although not fully as it only increases damage.

In Call of Duty: Infinite Warfare, an Insta-Kill can be spawned forcefully with the Death's Party Fortune Card.

In Call of Duty: Black Ops Cold War, Insta-Kill returns as normal, with the bonus of helping the player deal extra damage to elite enemies.

There are two different colors for this power-up and they have different functions.

This power-up is only used for one persistent upgrade. 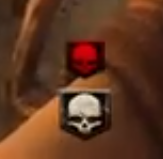 These are the two icons for Insta-Kill. Note that the red icon only appears when the player has obtained the Persistent Upgrade and lasts fifteen seconds as the other lasts 30 seconds.