Instinct is a multiplayer map featured in Call of Duty: Advanced Warfare. It takes place in a wide open jungle offering fast-paced action. It pits players in a mining operation in South America. This map was revealed in the Multiplayer Reveal trailer showing off one of the new Scorestreaks implemented. Instinct appears in Exo Survival as a Tier 2 map.

The map has these moving excavators which are powered by power generators. These excavators are not interactive, but players will tend to feel a slight quake effect when under the digging mechanism. It features a variety of giant machinery of what looks to be walker cranes. The ruins are found in the middle, Southeast and North sides of the map of which players can use as coverage or sometimes get a clear shot at the far side of the map. Since the map is wide open, players equipped with long range weaponry such as sniper rifles have a good advantage in terms of lines of sight and since it also takes place outside, players will be vulnerable to aerial Scorestreak attacks. There's a small, dark cave at the Northeast side of the map. Due to its dark surroundings, it is perfectly suited to carry close range weaponry.

In Domination, the C Flag is located beneath a walker crane, there aren't any good capture spots beneath the crane, however, the left leg of the crane can be use as either a defensive position or a sniper position. If players go on sniper position, there are two portions of lines of sight. One is the right portion of which the B Flag can be seen. The left portion allows people to pick off enemy players on the rooftop of a temple since it is a common spot that people will go to. 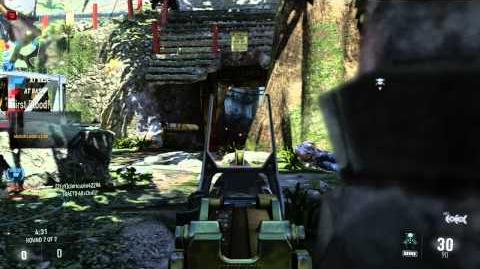 Call of Duty Advanced Warfare Capture The Flag Instinct (No Commentary) (Xbox One)
Gameplay in Capture the Flag.