The Intelligent Munitions System (I.M.S.) is a five-point Assault pointstreak reward that appears in Call of Duty: Modern Warfare 3 and Call of Duty: Ghosts.

"Once you hear the I.M.S. go off, it's too late."
— In-game multiplayer intel

The I.M.S. is an anti-personnel explosive device similar to the Bouncing Betty. It is a small box on the floor that fires a shell vertically, which in turn then shoots an explosive down at enemies within its targeting radius of 6.5 metres. It can deploy a total of four explosive charges before self-destructing.

Unlike the Sentry Gun, another unmanned five-pointstreak, the IMS can detect any hostile even with Blind Eye, is hidden from radar even when it attacks, and can be deployed immediately upon acquisition. Players who are killed while holding it will instantly place it.

Secondly, the I.M.S. makes a low-pitched "ping" sound when an enemy player enters close proximity, right as it sets off one of its charges. A set-off charge will almost always kill the player who set it off, regardless of if he has a Riot Shield (unless the player places it on his back and lies down immediately) or Blast Shield.

It takes three hits from an I.M.S. to kill a Juggernaut.

If the player can do so, the I.M.S. will react more quickly in a roofed building. The charge will hit the roof before it reaches its maximum height, and attack as soon as the charge hits the roof.

Although the IMS is generally concealed from radar, SitRep-employing players can detect it. Stalker Pro allows users to delay it by 3 seconds. Stalker users can use this extremely long delay to run to safety, where the I.M.S.' path to hitting the player is obstructed. It can also be temporarily deactivated by concussion grenades and flashbangs.

The IMS can alternatively be destroyed by an EMP Grenade, or by simply shooting it until it takes enough damage. Knifing it or detonating an EMP would instantly destroy it. If a player places a second I.M.S. the first one will self destruct instantly.

Due to the IMS's sheer size, hiding it properly poses a problem especially on maps that lack cover.

An effective tactic to counter the IMS is to simply keep dodging in and out of cover where the explosive charge the IMS shoots cannot hurt the player. Doing this, all 4 charges can be wasted easily, rendering it useless. 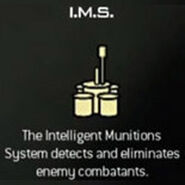 An unused killstreak icon for the I.M.S 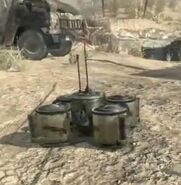 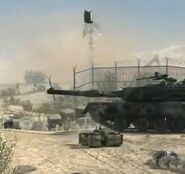 Another look at the I.M.S. in action.

The I.M.S. returns in Call of Duty: Ghosts as a five-point Assault streak. It functions almost exactly the same as it does in the version of the I.M.S in Call of Duty: Modern Warfare 3, with some minor differences. The biggest difference is that it is possible to avoid the explosive if it is discharged by taking cover behind a tall wall or object. The I.M.S. is also featured in Extinction mode.

The I.M.S. appears in Extinction as a strike package, that costs $1250.

The I.M.S. is the cheapest strike package on offer, and is unlocked by default. When a cryptid enters its vicinity, it will launch a charge into the air and then home in on said cryptid. If the targeted cryptid is killed, the I.M.S. can behave erratically and do one of two things: it will shoot where the cryptid was last seen alive, or it will try to hit the next closest cryptid on the map. Should the I.M.S. try to do the latter, it can take quite a long time for the I.M.S. to hit its target, and the target can be obscured behind cover, wasting a shot.

The I.M.S. is very useful due to how cheap it is, and it is great for defending a valuable target, such as a Sentry Gun, Generator, or the Laser Drill. When defending valuable targets, the I.M.S. drastically minimizes the amount of time an enemy Cryptid has to deal damage to it. Its low price also makes it an attractive strike package option to those who need to do other things with their money, or those who do not like to use their strike package much and just want a cheap option that can be deployed easily when said player has cash to burn.

When fully upgraded, the I.M.S. is a fast reacting, powerful tool that can outright kill a Hunter or Scorpion. It cannot kill Phantoms, Mammoths or Rhinos in one hit, but it deals signficiant damage to them, softening them up.

Its main weakness is its slow reaction speed, but this can be improved upon.

The I.M.S. has two armory upgrades: Fast Trigger, which shortens the firing delay, and Flaming Pools, which will spawn fire on the area that the explosive detonated, similar to a Propane Tank. Players should be careful when using Flaming Pools, as the fire damage can hurt any player, even on regular difficulty. Due to the damage Flaming Pools does to other players and the user, it is often seen as one of the most despised armory upgrades in all of Extinction, and it can draw the ire of teammates.

As of the 3rd June Update for the Invasion DLC, the I.M.S has two Armory Upgrades: