"Destroyed freeway. Great for a wide range of spaces and styles."
— In-game description

Interchange is a multiplayer map in Call of Duty: Modern Warfare 3.

The map features a bombed out highway in New Jersey, USA. It shows signs of significant combat and destruction, suggesting the battle for New Jersey was just as hotly contested as New York and Washington. Multiple destroyed Humvees and M2A2 Bradleys can be seen throughout the map, suggesting that there was a military convoy moving through during the bombing of the highway.

Interchange is a medium sized map featured in Call of Duty: Modern Warfare 3. The two main spawn points are on either side of the map.

The map consists of many long lines of sights and few indoor areas. There are many wide-open locations that are great for snipers. There are also quite a few tight corners that may be in favor of close quarters weapons. The underpasses can be used to avoid air support if needed. There are also several crashed vehicles that provide excellent cover.

In Survival Mode, Interchange is a Tier 1 map and has the difficulty of Easy. The player starts with the Five Seven, two Frag Grenades, two Flash Grenades, a Self Revive, and 250 Armor. The hostiles include Bomb Squads, Attack Dogs, Choppers, and Juggernauts. The Claymore Experts spawn in around wave 22.

Another look at Interchange.

Destroyed power lines and New York in the distance. 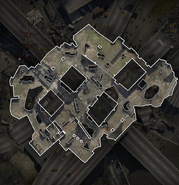