For other uses, see Intervention.
For a similar sniper rifle, see DL Q33.

In the campaign, it is only found in the following missions: "Wolverines" on the rooftops with the supply drop, "The Only Easy Day... Was Yesterday" with Thermal Scope attachment and "Just Like Old Times" as a starting weapon with Silencer attachment.

In the intro cutscene of "Just Like Old Times", the screen lists the weapon as a "CheyTac Intervention bolt-action anti-materiel rifle".

The Intervention is a starting weapon in "Hidden" and "Snatch & Grab". It is also an alternate weapon in "Body Count", "Homeland Security", "Armor Piercing" and "Wetwork". It is a good weapon to counter Juggernauts with should the player lack the Barrett, but it requires six shots to kill these behemoths whereas other enemies will fall with one round.

The Intervention is available at level 4, when Create-A-Class is unlocked. The rifle has a low fire rate and high sway, but has high damage multipliers with varying levels of recoil. Extended Magazines doubles its five round capacity, which is the lowest of all primary weapons.

With Stopping Power, the weapon kills in one hit to the head, neck, chest and stomach. Without it, it loses the one shot kill to the stomach. Targets will require multiple hits when Painkiller, Last Stand or Final Stand is used, or when firing through cover. However, headshots cancel out Last and Final Stand.

With a Silencer, Stopping Power is required for a one-shot-kill. The Intervention is able to get one-shot-kills if the player hits the head, neck or chest.

In Hardcore, the weapon will always neutralize targets in one shot anywhere in the body, with or without Stopping Power, regardless of attachments, again unless Last Stand is used by enemies or when firing through cover. Due to this fact, other sniper rifles are recommended, as the Intervention's low rate of fire lets it down as other rifles can attain one hit kills while having higher rates of fire and lower recoil as well as higher magazine capacities.

The rifle is one of the best suited sniper rifles for attaining the "Perfectionist" challenge due to its low magazine capacity. The WA2000 can be better suited for this task, as it boasts lower recoil, lower damage (meaning follow-up shots can be done faster), higher fire rate and lower idle sway and one extra bullet when compared to the Intervention. The Intervention has a very quick Reload Cancel when reloading an empty magazine - its ammo counter is filled almost as soon as the magazine is taken out.

The Intervention is statistically outclassed by the Barrett .50cal, sharing the same damage multipliers while having a much slower rate of fire, greater idle sway, smaller magazine capacity and, although lower, still less predictable recoil.

Though the Barrett .50cal is limited by its recoil, it can still hit follow-up shots significantly faster than the Intervention, since the Barrett's recoil resets faster than the Intervention's bolt is pulled. Because of what the Create-A-Class statistics state, some players believe the Intervention is more accurate than the Barrett, but this is not true; the center of the scope's cross-hairs of every sniper rifle is always where the shot will land, and the higher accuracy is only for the lower recoil. Despite its drawbacks, the Intervention is one of the most popular sniper rifles online because of its bolt-action nature, which can be more exciting to use than a semi-automatic, and is the weapon of choice among rushing snipers and 'quick-scopers'. Also, the Intervention is very popularly used in montages, as it is believed to require more skill to use, due to its bolt-action nature.

This weapon is also very commonly found with the FMJ attachment, mostly because of the popular belief that FMJ adds damage on other players, though this is untrue; it only reduces damage lost when shots are fired through objects, such as wood and metal. Without FMJ, even with Stopping Power one-shot-kills through cover are entirely impossible unless the opponent was already injured - even if the shot was penetrated through thin glass. However, with said perk and attachment, the player will have one-shot-kill potential to the head, neck and chest. Sometimes it is attached with an ACOG Scope, making it an assault-type sniper rifle, giving the user peripheral vision at the cost of decreased zoom and the inability to steady the rifle, although the M14 EBR would be a better weapon when equipped with an ACOG, having less recoil, higher magazine capacity, lower reload time, lower sway, and higher rate of fire. 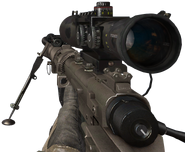 The Intervention's appearance in first person

The Intervention in third person 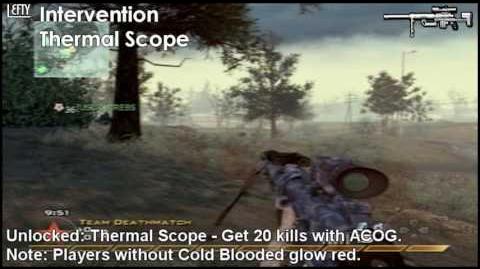 Simon "Ghost" Riley
The Intervention returns in Call of Duty Online as the CheyTacM200, but with a black finish, contrary to the brown finish in Call of Duty: Modern Warfare 2, and a different scope.

The CheyTacM200 with a suppressor

Purchase this weapon with a Classic Weapon Token.
Level 21 (ZM)

The Intervention returns in Call of Duty: Infinite Warfare as the TF-141, which is named after Task Force 141. However, unlike the Call of Duty: Modern Warfare 2 version, it now has a 6 round magazine instead of 5.

The TF-141 is available for purchase with a Classic Weapon Token after entering Prestige Mode.

The TF-141 can be acquired from the Magic Wheel for 950 Points. It is available for customization at level 21. In Attack of the Radioactive Thing, it appears in the Motel area on top of a low wall for 1000 points. When Pack-a-Punched it becomes the Surgical Striker. When Double Packed it becomes the Death's Reflection. 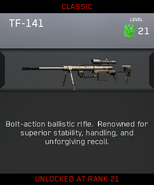 The TF-141 being unlocked in Zombies

junsnp
The Intervention returns in Call of Duty: Modern Warfare Remastered as the S-Tac Aggressor, added in the June 27th, 2017 update.

The weapon is unlocked by completing the S-Tac Aggressor bounty. Once unlocked, it is available at all levels and is exclusive to Multiplayer.

Being a magazine-fed bolt-action sniper rifle, the S-Tac Aggressor combines the high power of bolt-action rifles with the quick reload speed of semi-automatic ones. However, the player still needs to cycle the bolt to chamber the next round (slowest in the game, at only 57 rounds per minute), making follow-up shots more difficult. For this reason, Double Tap is a useful attachment as it allows the bolt to cycle faster. Unlike the other bolt action rifles, the M40A3 and the R700, the S-Tac reloads by inserting fresh magazines instead of individual bullets. This makes it relatively faster to reload than its peers when empty or near-empty, but considerably slower to reload single bullets, making it overall less flexible for topping off than the other bolt action rifles.

The S-Tac Aggressor has the same damage multipliers as the R700 and Barrett .50cal, granting it the highest overall damage in the game. In addition to the high damage, the S-Tac Aggressor sports the same ACOG Scope quirk as the M40A3, dealing 75 damage instead of 70 when it is equipped. This allows it to kill with one shot anywhere to the body of a non-Juggernaut user with Stopping Power equipped. The ACOG scope also reduces ADS time from 400 milliseconds to 300 milliseconds, making the S-Tac more nimble at the cost of reduced magnification and the inability to hold breath. The S-Tac is far better than the M40A3 when it comes to fighting Juggernaut users thanks to its increased damage, but suffers from the slowest rate of fire in the game.

Overall, the S-Tac Aggressor is an extremely powerful sniper rifle, in some cases beating even the R700 and Barrett .50cal.

The S-Tac Aggressor in first-person