Invasion is a medium-sized multiplayer map in Call of Duty: Modern Warfare 2 set in Afghanistan and based on the second campaign mission, "Team Player."

Invasion is similar to the map Crash in Call of Duty 4: Modern Warfare, featuring many elevated positions, close range fighting, and cover. Invasion is actually based off the area that Pelayo crashes in "Shock and Awe" in Call of Duty 4: Modern Warfare. On the eastern side of the map, the street is exactly the same as the one that Jackson walked down to retrieve Pelayo from the helicopter.

Invasion is an excellent map for car bombing other players, as C4 can be hidden under the many Humvees on the bridge and in the city. There are a total of nine Humvees but only seven can be blown up as the two near the left side of the base are invincible. On Search and Destroy game modes players can immediately shoot at the enemy spawn with grenade launchers. This is especially devastating on hardcore.

The Call of Duty 4 look for Invasion.

The setting seen from the Call of Duty 4 load screen in Modern Warfare 2. 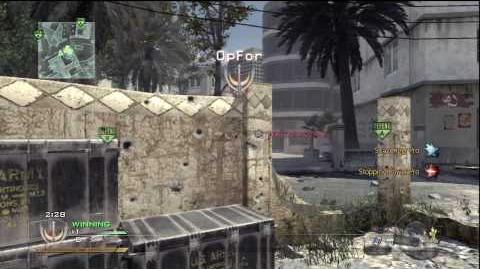