"Step into the fire!"
— Inviktor

Inviktor, also known as Inviktor the Destroyer, is a character featured in Call of Duty: Vanguard Zombies mode. Inviktor is a deity of the Dark Aether. First being mentioned in Call of Duty: Black Ops Cold War by Sparagmos in intel for the map Forsaken.

Inviktor the Destroyer is one of the many Elder Gods residing in the Dark Aether. Since the beginning of time, the Dark Aether has been at conflict, and Inviktor has fought nearly every one of the many battles fought in the hellish realm. Of note, Inviktor was a veteran of the Netherwars waged by Kortifex the Deathless in his pursuit to conquer the Dark Aether. A resistance against Kortifex soon formed, and at some point joined said resistance alongside Norticus the Conqueror, Saraxis the Shadow, and Bellekar the Warlock.

Inviktor took a liking to the humans of Ancient Greece and bestowed them with the sword. In particular, Invitor was recognised by the Greek Hero, Achilles, as Ares, the Greek God of War. Bonding with Achilles, aiding in the seige of the city of Troy. Eventually, the legends of the two would become mixed and future humans would recognise Inviktor as Achilles himself. [3]

Inviktor, along with the rest of the four aforementioned deities, would become trapped in various artifacts that made their way into the "realm of mortals". Then became trapped in said weapon - the Sword of Inviktor.

These artifacts would be discovered by Wolfram Von List and Die Wahrheit, remaining dormant in their possession. However, the breaching of the Dimensional Membrane at Poland by Projekt Endstation activated the artifacts. Kortifex, through his own artifact, would bond with Von List and allow him to command an army of the dead. The artifacts of the revolting gods would make their way into the ownership of Allied operatives deployed to Stalingrad, bonding with those who wielded them. Specifically, the Sword of Inviktor utilized the power of the Ring of Fire.

"Created by the blast of the three-headed beast, the Geode's sharp edges could cut through Inviktor's Shield, let alone the flesh of mortal or unmortal."
— Sparagmos

After the appearance of the Forsaken in the Dark Aether, he soon vied for power against the Old Ones, who ruled the Dark Aether at that point. While it is currently unknown whether or not Inviktor held any role during this power struggle, he was remembered by the Zealot Sparagmos while crafting the Chrysalax, stating that the Energetic Geode had such sharp edges that they could cut through Inviktor's Shield.

"It is said all combat is based on deception, but nothing reveals the truth like a fight to the death. So don't tell me who you are, human. Show me. Bathe in the blood of your enemies. Only then will I know you are not wasting my time."
— Inviktor

Inviktor is an honorable deity who takes pride in the many battles that were fought and won. However, Invitor acts dismissive of humanity and unimpressed by their ways. Regardless, Inviktor sees enough potential in humanity to trust them in defeating Kortifex. While paying most of mankind little attention, Inviktor does share a special disgust and hatred of Wolfram Von List. His dismissiveness seems to later turn into genuine interest and respect towards mankind later on in Shi No Numa, where he states he's never seen anything quite like them. 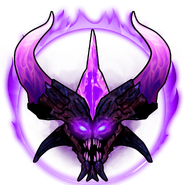 Inviktor, as seen on the Ring of Fire icon.