"Use the UAV and a Juggernaut suit to find and defuse IEDs."
— Level Description

This mission takes place in the streets of Berlin, Germany. When playing with two players, one player is equipped with an explosive ordnance disposal suit and must defuse eight IEDs placed around the map. The second player provides cover with a Barrett M82 sniper rifle and a thermal SCAR-L from a distant rooftop, and has remote control that access to a MQ-1 Predator drone, which he must use it to find the IEDs so that the ground player can defuse them. If playing solo, the player is on the ground with the Juggernaut suit, but he can also use the drone. Both players face heavy opposition from enemy tanks, infantry and attack helicopter. 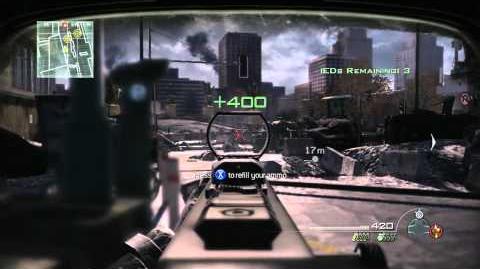 Eight IEDs are scattered throughout the parkway in Berlin and it's up to Metal Zero-Four to defuse them. When there are two players, one is on the rooftop with sniper rifle and remote control of a Predator drone carrying AGM-114 missiles. The other is on the street with an explosive ordnance disposal suit. In solo mode, the player has the Juggernaut suit and the Predator, thus giving you both jobs.

Press the required button to have the Predator detect IEDs. This will identify their locations on the streets. Hit the appropriate button to arm a missile and send it toward the right IEDs. This clears out any enemies in the area.

Now the player on the streets can move between the IEDs and defuse them. During this time, the second player can protect his partner with his sniper rifle.

The rooftop sniper should call out where the enemies are so his teammate can take cover when necessary. Make the way down the street, using the Predator Missile to nail incoming enemies. With all the IEDs defused, the mission ends.

An aerial view from the UAV.

AH-6 Little Bird that appears in this level.