Iron Lady is the twelfth mission of Call of Duty: Modern Warfare 3. The mission is a continuation from the previous one, "Bag and Drag", and takes place in Paris, where the player mans the guns of an AC-130, similar to the Call of Duty 4: Modern Warfare mission "Death From Above". The player toggles between Derek "Frost" Westbrook and the AC-130 Gunner.

The mission begins with Frost with the rest of Metal Team and a captive Volk, waiting for extraction by Raptor 2. However, as a V-22 Osprey (possibly Raptor 2) flies towards the extraction point, it is hit by enemy rocket fire, and spirals out of control. The helicopter hits a large group of cars, and Metal Team are forced to dodge the carnage caused by the crash.

Since their primary landing zone is compromised, an AC-130 with the call sign of "Warhammer" is tasked with escorting them to another extraction point. The AC-130 crew is cleared to use lethal force against any enemy infantry, armor, or air units, however, their rules of engagement do not permit the use of deadly force against the buildings as it is believed that civilians may still be inside. As a large enemy force consisting of infantry, helicopters and tanks starts to travel through a large roundabout, the gunship fires, destroying large amounts of the Russian personnel and assets. As the AC-130 is mopping up, Odin 6, a group of three A-10 Thunderbolt IIs, commences with a bombing run which destroys the remaining Russian armor in a spectacular explosion. Before Metal Team can move up, the gunship sweeps the surrounding streets, clearing out more enemy forces in the vicinity. When the area is clear, Metal Team starts to advance down the street. However as they do, more hostiles appear and Warhammer decimates them. As the Delta squad start to move closer to a junction, enemy infantry engage them from behind, and the gunship again takes them out.

Approaching the fork in the road, hostile armored vehicles and helicopters emerge, and Warhammer has to destroy them. When Metal Team finally reaches the fork in the road, they come under heavy RPG fire from a building in the middle of the fork. After getting clearance from Overlord, Warhammer fires at the building, causing half of it to collapse, which kills all enemies inside. Metal Team takes a left at the fork and heads towards a hotel across the street. Above them, Warhammer is targeted by Russian MiGs, forcing the crew to deploy flares and make sharp turns to avoid enemy missiles. Before the MiGs can make another pass, they are intercepted by American Air Force fighter planes. The friendly fighter planes can not stay for long however. Resuming its task, Warhammer fires on the embassy.

Inside the hotel, Metal Team are pinned down by enemy fire, and Warhammer can't provide fire support due to hostile fire. Sandman, seeing that they're on their own, order Truck and Frost to flank the enemy machine gun pinning them down. Running through the hotel's corridors, they engage a small group of Russians. Eventually they arrive at a balcony with a view over the courtyard. Frost picks up a sniper rifle and kills the machine gunner. When he is eliminated, Metal Team advances into the courtyard, killing hostiles in the embassy. Once they reach the end of the courtyard, a Russian tank appears. Frost throws a smoke marker near the tank, so that Warhammer can destroy it.

As Metal Team wait for Uniform 6-2 to extract them, a large Russian force surrounds the area. As Warhammer starts to clear them out, the Humvees arrive. Russian forces, alerted to the convoy's presence start to converge on it, and Metal Team along with Viktor "Volk" Khristenko board the Humvees. Uniform 6-2 leaves the intersection and barely miss being hit by rockets, fired by Russian MiGs. Sandman orders Grinch to man the .50 cal, mounted on top of the Humvee. Two enemy vehicles start to chase Uniform 6-2 through the French streets. Helicopters join the pursuit, and Warhammer destroys the enemy vehicles. The convoy makes a hard left to avoid more enemy armor. They continue to make sharp turns to dodge the enemy vehicles, which Warhammer destroys. Eventually the convoy drives through an intersection where three hostile tanks are side by side trying to destroy the convoy, but the gunship eliminates them.

Uniform 6-2 turns right and starts to drive along the side of the Seine River. Multiple enemy helicopters start to pursue them, and Warhammer uses precise aiming to destroy them. However, as the convoy reaches the Pont d'Iéna, a tank round hits the front Humvee, flipping it over. Uniform 6-2 stops at the bridge and Warhammer begins to engage tanks stationed on the bridge. Frost clambers out of the overturned Humvee, and is ordered by Sandman to grab a Javelin. Using it, he destroys two enemy tanks. Using smoke markers to indicate targets for Warhammer, Metal Team advance along the bridge. As they reach roughly halfway along the bridge, a Russian MiG attempts to bomb the U.S forces, but instead hits the bridge. Sandman throws down red smoke to mark the extraction point.

As Russian helicopters insert even more infantry, Warhammer runs out of fuel and is forced to return to base. A significant concentration of enemy armor and infantry converge on Metal Team's position from the Eiffel Tower. Odin-6 returns for a bombing run, but because Metal Team is all out of smoke markers, it is forced to perform a dangerously close bomb run north of Metal's position. As the Russian forces are obliterated, the Eiffel Tower, having sustained too much damage, tips over and falls into the river. As it collapses, a large force of American helicopters swarms the landing zone. Everyone boards a Little Bird, except for Grinch and Volk, who waits for the next helicopter. The mission ends with Metal Team being extracted from the bridge with a view of the destroyed Eiffel Tower. Multiple CH-46 Sea Knights are seen going to the bridge, while airstrikes are being launched at a building. 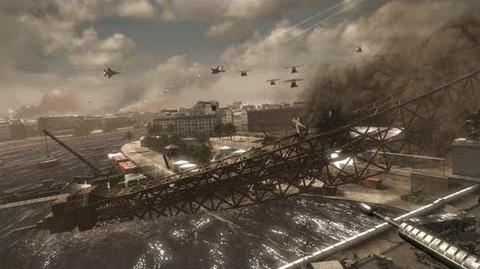 Another view of the AC-130 over Paris in Iron Lady.

An explosion in front of the Eiffel Tower. 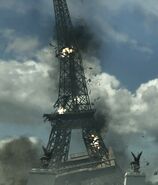 The collapsing of the Eiffel Tower.

A Fighter Jet crashes onto the bridge by the Eiffel Tower.

30. First snipe the mounted gun, then head into the glass greenhouse building and locate the intel at the top of the stairs inside.

31. After battling the tanks, spot a bus on the left side of a bridge. The intel is inside it toward the back. 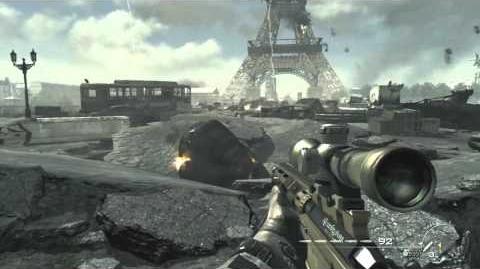