"Born of an Urzikstani mother and Russian father during Barkov's occupation. Raised in Farah's Army as a Russian-fluent scout/saboteur. Cut-off outside Urzikstan after events at Tariq-Almawt. Joined Chimera to fight the new AQ."
— In-game biography

Iskra (Russian: Искра) (Arabic: إسكرا) is a Chimera operator of the Allegiance faction featured in Call of Duty: Modern Warfare. Iskra was released on May 13th, 2020 during the Season Three of Modern Warfare.

Iskra appears in Call of Duty: Mobile and was added as part of the Season 9: Nightmare Battle Pass. [1] 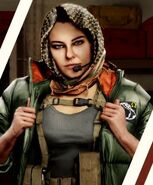 Iskra in the Season 3 roadmap.

A render of Iskra in her "Killswitch" skin.