The Jack-in-the-Box is a special tactical grenade that is found in Call of Duty: WWII Nazi Zombies. It can be found in the Mystery Box on all maps and can be given to the player randomly through a Waffenbox in The Tortured Path. When thrown using the 'Tactical Grenade' button, it will attract any nearby zombies to the device, very similarly to the Monkey Bomb from Treyarch Zombies. When the song playing from the box finishes and the "jack" pops out of the box, it will explode.

The Jack-in-the-Box shares the same activation button as the Pommel of Barbarossa, and one will replace the other if picked up.

The player used to be able to carry 6 Jack-in-the-Boxes with the Stormraven "Grenadier" Mod which was only supposed to double the player's lethal equipment but also affected the Jack-in-the-Box. This was patched after an update. 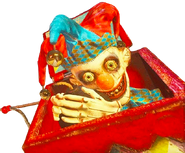 Holding the Jack-in-the-Box in first person.