For other uses, see Mitchell.

"We come into this world with our eyes closed. And most of us choose to live our whole lives that way. We blindly follow anyone who would lead us... giving ourselves over to anything that provides us with a sense of purpose. For me, it was the Marines."
— Mitchell's opening line in Induction

Jack Mitchell is the main protagonist in Call of Duty: Advanced Warfare. He served in the United States Marine Corps before his best friend, Will Irons sacrificed himself to destroy a HAVOC launcher. After Will's death, his father Jonathan Irons offered Mitchell a job at the Atlas Corporation. He would become one of their top operatives, until he betrayed Irons for his terrible actions and joined Sentinel Task Force alongside his old squad leader, Cormack.

Nothing is really known about Mitchell's life before he joined the Marines and was sent to South Korea, other than that his father was a Marine and his best friend was Will Irons.

Mitchell enlisted in the Marines with his best friend Will Irons and, six months after enlisting, he and Will were deployed in Seoul, South Korea, as part of a large Marine force tasked with repelling a massive North Korean invasion. Under the command of Sergeant Cormack, Mitchell and Will's objective was to rendezvous with a demolitions team and assist them in destroying a North Korean gunship. However, they arrived too late, and the demolitions team were all KIA. Cormack, determined to complete the objective, ordered Mitchell and Will to secure the explosive charges and blow up the gunship themselves. Although they succeeded in their mission, Will's arm got stuck in an access panel on the side of the gunship and although Mitchell tried to save his best friend's life, the charges exploded with Will still on the ship. A sharp piece of shrapnel from the explosion cut off Mitchell's left arm off after falling off the gunship. Cormack rescued a severely injured Mitchell from the wreckage. Will apparently survived the initial blast, and was put on life support for a short period of time before he succumbed to his wounds. Due to his injuries, Mitchell was subsequently discharged from the Marine Corps.

Whilst attending Will's funeral with Cormack, Mitchell was approached by Will's father, Jonathan Irons. Irons offered Mitchell a job at his private military company Atlas, and although Cormack objected to the idea, Mitchell joined up and was given a "second chance" at a military career in the form of a high-tech prosthetic arm. During training, Mitchell became acquainted with and befriended Ilona, Gideon and Joker, some of Atlas' best operatives.

Mitchell's first real assignment with Atlas was the rescue of Nigerian Prime Minister Samuel Abidoyo from KVA forces led by an anti-western terrorist codenamed Hades. It soon became apparent that Hades was not targeting the Prime Minister, but a technologist who had been attending the same conference. Mitchell and Gideon rescue the technologist and take him back to Atlas headquarters on Jonathan Irons' command.

Soon afterward, nuclear power plants all around the world were stormed by massive KVA forces, and Atlas was assigned to retake the Vekron Pacific Power Plant in Seattle, Washington. Mitchell, Gideon and Joker managed to push back KVA troops from the power station, but they were too late to stop the reactors from exploding, a fate that would be shared with every power station that the KVA attacked. After these attacks, the world is sent into a state of chaos and disarray, with fifty thousand people getting killed and many more displaced.

Four years later, Atlas has become the largest corporation in the world, due to its worldwide support of victims of the KVA attacks. Atlas now has bases in almost every country in the world and provides aid and shelter to the populaces. Mitchell, Gideon and Joker are stationed in the abandoned city of Detroit to find and capture Hades' right-hand man, Dr. Pierre Danois. They find him hiding out in a hospital and take him back to Atlas headquarters for interrogation. Ilona manages to get answers out of him and he indicates that Hades is in Santorini, Greece, meeting with his top financial advisers.

Irons sends in a small Atlas team to assassinate Hades, despite strong opposition from the U.S. government. Despite an initial ambush from KVA forces, the mission is successful and Mitchell kills Hades after a brutal melee. A dying Hades mumbles "Irons knows" before giving Mitchell a date chip, then Mitchell hands the chip to Ilona.

Escape from Atlas with Ilona

Back at the Atlas headquarters in New Baghdad, Mitchell and Gideon are informed by Ilona that the recording that Hades gave them actually depicts the technologist from Nigeria warning Jonathan Irons of the imminent KVA attacks on the nuclear reactors around the world, to which Irons responded by shooting and killing the technologist and keeping the warnings a secret in order to make a profit and gain power from the disastrous aftermath. Mitchell and Ilona are determined to leave Atlas, but Irons arrives with Atlas soldiers and holds them in custody. Gideon remains loyal to Irons and refuses to help them. An unknown man contacts Mitchell through his communications and helps both Mitchell and Ilona escape, and although Gideon has a chance to stop them, but he and Joker deliberately let them go (with Gideon telling them "If you're wrong about Irons, I'll hunt you down myself"). Mitchell's mysterious saviour reveals himself to be Cormack, now an operative and leader of the Sentinel Task Force, an elite U.S.-led multinational special ops team formed to investigate the KVA attacks and the Atlas Corporation.

Mitchell and Ilona join the Sentinel Task Force and assist Cormack and Knox in infiltrating Jonathan Irons' private estate in Bangkok, Thailand, to recover intel on a mysterious Atlas operation called "Manticore". They find out that Manticore is a biological agent that does not affect the DNA of people on Atlas' databases. A large shipment of Manticore, created by Dr. Pierre Danois, is headed out for Argentina, but Sentinel manages to down the cargo plane over Antarctica and secure the cargo. During the process, Mitchell, Ilona and Cormack are captured by an Atlas squad under the command of Gideon, but Gideon betrays his Atlas comrades, saves the three and helps them recover a sample of the Manticore cargo.

Destroying the Manticore Factory and Attack on San Francisco

Gideon then joins the Sentinel Task Force and lifts the lid on an Atlas factory in Bulgaria that is producing Manticore. Sentinel infiltrate the factory and destroy it before escaping in an experimental Atlas tank. A few months later, Jonathan Irons becomes an official member of the United Nations Security Council and delivers an intimidating speech to the United Nations and declares war on the governments of the world. He follows up on these threats and attacks the U.S. Third Fleet in San Francisco by demolishing the Golden Gate Bridge over a carrier. Mitchell and Gideon attempt to stop the attack but fail. Cormack and Knox join them in the field and retake the carrier, repelling several attacking Atlas ships in the process.

After Irons' attack on the United States, Sentinel sends out a massive force to assault the Atlas headquarters in New Baghdad, Iraq. Mitchell, Ilona, Cormack, Gideon, and Knox lead the attack and just as it looks like Sentinel have won the battle, Irons deploys Manticore and all Sentinel forces, including Knox, are wiped out instantly. Mitchell, Ilona, and Gideon are not affected because, as former employees of Atlas, their DNA is in the Atlas database and are thus inoculated, and Cormack was outside the attack's area of effect. They are, however, captured by Atlas forces as Irons makes a victory speech to his soldiers and to the citizens of New Baghdad.

The three are taken to an Atlas prison camp, where they meet Cormack who was recently captured. Irons personally confronts Mitchell and Cormack and shoots Cormack in the hip, then berates Mitchell for his betrayal and disables his prosthetic arm by smashing it with a socket wrench, rendering it useless. Ilona and Gideon manage to overpower their captors and rescue Mitchell and Cormack. During their escape, they learn that Irons intends to launch Manticore strikes against every major military base in the world. After Mitchell, Ilona, Cormack, and Gideon escape from the camp, Cormack dies from his wounds. Mitchell, Ilona and Gideon then swear to kill Irons and stop Manticore from being launched.

With no real plan, Mitchell and Gideon assault the Atlas Command Center in a pair of commandeered A.S.T. suits, while Ilona guides them through the facility. They manage to abort the launch of the Manticore rocket but they are forced to abandon their A.S.T.'s. Irons confronts them and locks down their exoskeletons, rendering them unable to move. He refuses to kill them in an attempt to show he still has some humanity left in him. Mitchell manages to escape the confines of his exoskeleton and catches up to Irons, and after a brief struggle atop the roof of the Atlas headquarters, Irons is left hanging onto Mitchell's limp prosthetic arm to save himself falling off the edge of the balcony. Mitchell, unable to shake Irons off, severs his own prosthetic arm in order to let Irons fall to his death. Gideon arrives in time to help Mitchell and as the two leave, Mitchell comments that Atlas is still at large and the real war has only just begun.

Mitchell and Will Irons before heading into Seoul.

Mitchell being dragged to safety by Cormack after his arm was severed.

Mitchell with Gideon and Joker in the opening cutscene of Traffic.

Mitchell with Gideon and Irons in the opening cinematic of Utopia.

Mitchell using a Knife in Sentinel.

About to smash the soldier's face in, Gideon in the background.

Mitchell and Gideon en route in Bulgaria and being deployed to an Atlas Bioweapons lab.

No matter how bad it got. I could always count on him for keeping me in line. 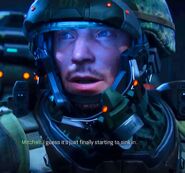 I guess it's finally starting to sync in.

"Life with ATLAS was nothing like the Marines, but I wasn't complaining."
— Mitchell about his life in Atlas Corporation

"After Korea, I thought I was done but Irons gave me something to believe in. It's one thing to get your foot in the door, next, you gotta prove you belong there."
— Mitchell

"And in the same moment, you see a different path stretch out in front of you. The path you could've taken at the first step."
— Mitchell

"Only the dead have seen the end of war."
— Mitchell