"Born in rural Tasmania, grew up on long-distance 4x4 expeditions into the bush. Described as "fearless" by friends and family, enlisted with Australian Army "for the challenge." Proficient in navigating chaotic hot zones."
— In-game biography

Sergeant Jackson Henry Wyatt is a Warcom operator of the Coalition faction featured in Call of Duty: Modern Warfare.

Jackson Henry Wyatt was born in 1992 in rural Tasmania, Australia. He grew up with three brothers: Billy, Jimmy and Jeffy. Jackson grew up and was raised on long-distance 4x4 expeditions and wilderness training into the bush. Jackson was described as "fearless" by his friends and family.

In 2010, Jackson and his brothers joined the Australian Army "for the challenge" and served full tours in Afghanistan, Iraq, and Libya. While his brothers returned to Australia, Jackson chose a military career and was accepted into the 1st Commando Regiment of the Australian Special Forces in October 2012. He was later deployed to Afghanistan, Libya, Iraq, Syria, and Somalia. He then took parts in different operations in Urzikstan from 2015 to the present day.

Wyatt was recommended for the Warcom unit of the Coalition by Benjamin "Otter" Lee.

In March 2020, Al-Qatala's new leader Khaled Al-Asad launched a full-scale assault against Verdansk, Kastovia. Operators from Coalition and Allegiance were deployed to Verdansk to stop Al-Qatala as part of the Armistice initiative.

Wyatt appears in Call of Duty: Mobile and was added on February 10, 2022 during Season 1: Heist as part of the Shadow Chaser Bundle. 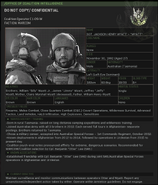 A render of Wyatt in his "Run and Gun" skin.