Certain equipment that is near a jammer will cease function until the Jammer is either moved or destroyed. Others will only be jammed temporarily, with the severity of the down time dependent on how close the particular electronic is to the Jammer.

Due to the Jammer jamming the mini-map, the Jammer can be considered a partial counter to the Spy Plane and Blackbird, with the Jammer being the only potential item which can do anything to directly hinder Blackbird usage beyond attempting to fool the enemies.

The Jammer has a very large radius of effect, which is useful when using it to complete the Hacker Pro challenges, as this will give the user a lot of freedom to move around as they desire.

The Jammer's utility is highly dependent on what the enemies are doing. If the enemies are making extensive use of things such as Claymores, Motion Sensors, RC-XDs, and other electronics, the Jammer can be quite a nuisance to the enemy. Because of that, though, the Jammer tends to be a pretty big target, and the Jammer will tend to be destroyed by those who are annoyed by the Jammer's effects. It can be especially effective against opponents who guard their flank with Claymores, as the Jammer can disable the Claymore and allow the player and/or their allies to rush through that flank without fear of the Claymore destroying them, without needing to use tactical grenades. If the enemy is not making liberal use of such items when the user wants to deploy the Jammer, or if the user has trouble getting into a favorable position to deploy the Jammer, then the Jammer's usefulness dwindles severely. Hacker Pro users can also hack the Jammer and use it against the original user's team, so be mindful of if there is an enemy using such a perk. 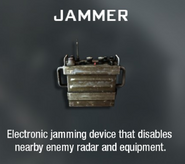 The Jammer seen in Create-A-Class 2.0.

The Jammer being held. 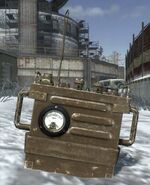 Jammer appears in Call of Duty: Black Ops: Declassified as a Tier 1 perk.

In the campaign mission "Armada", Mitchell plants two jammers on the aircraft carrier's Rail Guns. He also uses one in "Bio Lab". 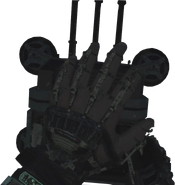 The Jammer returns in Call of Duty: Black Ops Cold War as a Field Upgrade.

When placed, the Jammer disables all enemy Field Upgrades within its radius (except other Jammers) and will place a static circle on an area of enemy players’ Minimaps, preventing any players‘ or Scorestreaks’ locations from being revealed. Any players with the Jammer’s radius will also have their Minimaps scrambled, similarly to a Counter-Spy Plane. Enemy players with the Spycraft perk are immune to the Jammer’s effects, and can even hack the Jammer.

Although Jammers in Black Ops Cold War aren’t as visible as in previous iterations, they are instead much easier to track down, between the static circle they leave on the Minimap, and their constant sound cue alerting nearby enemies. Like all Field Upgrades, they can also be seen through walls by enemies with the Engineer perk. They award 100 points when destroyed, which is more than most other Field Upgrades.

In Hardcore modes, players are awarded points for destroying a teammate’s Jammer.

Jammers have both offensive and defensive utility. They can be laid down while advancing to stop the detonation of Proximity Mines or Gas Mines, or to stop a Trophy System from functioning, allowing players to toss Equipment while pushing forward as normal. When defending objectives, Jammers can prevent Spy Planes and HARPs from revealing players‘ positions, forcing enemies to use caution near them. Jammers are, unfortunately, also very fragile for their size, as a single bullet can destroy them, not to mention the blast from any wayward grenade.

"Jams the minimap of nearby enemies."
— In-game description

The Jammer returns in Call of Duty: Vanguard as a Field Upgrade.