The Jammer Grenade is a tactical equipment featured in Call of Duty: Infinite Warfare. It is unlocked at level 6.

When detonated, the Jammer Grenade will disrupt the minimaps and HUD of any players affected. It will also render their movement useless, slowed down to a crawl and unable to turn at normal speed.

The Tier 3 perk Hardwired gives an immunity to the Jammer Grenade's EMP effects, instead only disabling movement systems whilst keeping the HUD active.

The Jammer Grenade about to be thrown. 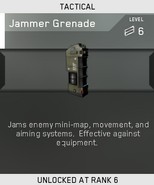 The Jammer Grenade when unlocked.
Add a photo to this gallery
Retrieved from "https://callofduty.fandom.com/wiki/Jammer_Grenade?oldid=2375232"
Community content is available under CC-BY-SA unless otherwise noted.