For other uses, see Crash.

Any weapon obtained by the player.

Unlocked At The Start

"Sure I trained as a vet - be happy it wasn't as a plumber."
— Jarrah "Crash" Bazley

Jarrah "Crash" Bazley is a character and playable Specialist in Call of Duty: Black Ops 4 multiplayer.

"A teenage sporting prodigy and top of his class, Jarrah's run of luck came to an end when, halfway through his veterinarian training - he discovered poker.

Obsessed with his new past time, Jarrah lost big and often, borrowing money from family and his swiftly dwindling circle of friends.

Spiraling deeper and deeper into debt, he took loans from unscrupulous people; local criminals, suppliers of low-grade narcotics and extorters of local businesses.

Unable to pay, it wasn't long before Jarrah's fledging surgical skills were being brought to bear on the gunshot and stab injuries resulting from their rivalries.

Eventually realizing that they would never allow him to pay off his debts, he decided to disappear. Hitching a quarter of the way around the continent, he lost himself in the townships and camps that had sprung up on the coast around Darwin, making his way tending to the sick and injured.

After a few years moving from camp to camp, Bazley joined the Australian Defense Force, determined to do more than improve the lives of the displaced.

After an initial tour, he entered the ranks of the Special Air Service Regiment, qualifying as a Medical Sergeant... As Bazz tells his patients, "Stitching one animal back together, is much the same as any other..."

"Support your team with instant health buffs and ammo resupplies that accelerate the earning of Scorestreaks. When timed correctly, these actions can turn the tide of a battle."
— Description

Crash appears in Call of Duty: Mobile and was added on March 31, 2022 as part of the Season 3: Radical Raid Monthly Login Calendar, where he could be unlocked by logging in to the game for 24 days. 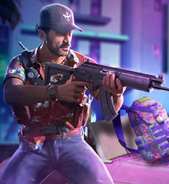 Crash with The Stache uniform.

Crash with The Stache uniform in-game.