"Hudson was a fuckin' ice cube, but that's why I liked the bastard."
— Mason

Special Agent Jason Hudson is a CIA agent responsible for handling Alex Mason. He is one of the main playable characters in Call of Duty: Black Ops.

Jason Hudson was born in Washington D.C. on March 26, 1932. Jason was a double major in psychology and political science at Georgetown University.

He was recruited right out of Georgetown University on recommendations from his academic adviser and former OSS field operative Marshall Bryant (a recipient of the Intelligence Star, 1950).

Hudson is an excellent tactician and mission coordinator, bringing the full brunt of his genius level I.Q to the field. As such, he has earned great trust within the halls of Langley and will undoubtedly go far considering his ability to command a room and crisis management skills. As one associate said, "Jason has a way with words; when he speaks, you can't help but listen."

Though much of his work keeps him away from the front lines, Jason is a very capable soldier (U.S 101st Airborne, honorable discharge, 1955), particularly when the mission calls for an element of subtlety and finesse.

Hudson was the one who introduced Alex Mason to President Kennedy, who gave him his first assignment.

By 1968, the Studies and Observations Group was established in Vietnam to investigate the Soviets' presence. Hudson works together with Mason and Frank Woods defending Khe Sanh.

Clarke Interrogation and the Hunt for Steiner

Later, Hudson and Weaver interrogate Clarke, an engineer who stabilized Nova-6 in Kowloon. Clarke identifies Steiner as part of the conspiracy, and reveals the location of a hidden facility in Mount Yamantau before being killed by Dragovich's men. Hudson and Weaver head to Mount Yamantau to destroy the facility and apprehend Steiner. During the mission, Hudson receives a transmission from Steiner requesting to meet him at Rebirth Island in the Aral Sea to learn how to halt a numbers broadcast with instructions to release Nova-6 gas in American cities. Mason heads to Rebirth Island to assassinate Steiner. Hudson witnesses Mason kill Steiner.

"Damn it! Why can't you remember!?"
— Hudson interrogating Mason

Following the death of Steiner, Hudson and Weaver interrogate Mason continuously. Hudson realizes that Dragovich brainwashed Mason to understand the numbers broadcasts, effectively becoming a Soviet sleeper agent. The duo repeatedly play the numbers sequence to Mason, with no avail. Out of options, Hudson deliberately sets Mason free in order to follow him. It is revealed that Reznov died during the Vorkuta break out, and Mason’s visions of Reznov are a result of a personality disorder caused by the brainwashing program. Reznov had, in fact, reprogrammed him to assassinate Dragovich, Kravchenko and Steiner instead of President Kennedy prior to the Vorkuta breakout. After subduing Mason, Hudson plays the numbers recording for Mason a final time, prompting him to remember the location of the Russian cargo ship Rusalka off the coast of Cuba.

By dawn, the team launches an assault on the Rusalka, with Mason and Hudson infiltrating an underwater broadcast station protected by the ship, a Soviet submarine station intended to be used as a staging point for US invasion after the planned Nova-6 attack. Confirming that the Rusalka is the numbers station, Hudson calls in the US Navy to destroy the ship and its underwater base. Mason and Hudson finally find Dragovich in the lower levels of the facility and manage to kill him before the destruction of the base, swimming for the surface during the destruction of the targets. Weaver declares victory, but Mason is unsure.

According to the unlocked Intel, Mason never fully recovered from the brainwashing, making the CIA suspicious of his future actions. Weaver and Hudson became targets of suspicion as well for their association with Mason and their supposed complicity in gathering top secret information for Mason. Sometime in 1978, Mason's decision to chase an as of yet unknown lead led the CIA to deem him "burnt" and a threat to national security, along with Hudson and Weaver who had escaped to South Africa with him. As of October 28, 1978, the CIA was making plans to form a joint task force with MI-6 in order to find and eliminate Mason, Hudson, and Weaver in what they dubbed Operation Charybdis. 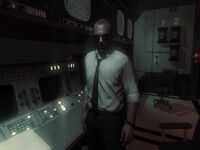 "The numbers, Mason, what do they mean?!"
— Hudson's repeated question

"Not yet... I have one more card to play."
— Hudson before finally revealing himself to Mason

"Jason Hudson, CIA. Thank you for your time, Sergeant."
— Hudson to Woods after his helicopter landing

"Dragovich brainwashed you, but Reznov had plans of his own. He was never in Vietnam. The real defector with the Nova 6 dossier died during the attack on the MAC-V. He was never in the rat tunnels. He was never at Rebirth Island. Viktor Reznov's been dead for five years. He died at Vorkuta during the escape! All the years you thought he was with you - that was just in your mind!"
— Hudson's revelation to Mason

Retrieved from "https://callofduty.fandom.com/wiki/Jason_Hudson?oldid=826878"
Community content is available under CC-BY-SA unless otherwise noted.