Mike Harper with a Five Seven or by the U.S. military drone fleet (player-determined)

"Today is a difficult day, Section. But tomorrow, we all win."
— Salazar to Section on why he betrayed his friends, as well as his last words if the player spared Harper in Achilles' Veil.

Chief Petty Officer Javier Salazar is a member of the Navy SEALs, but also works for Cordis Die as a double agent in Call of Duty: Black Ops II, where he is a part of David Mason's team. He accompanies Section on most of his missions in the future levels of the game until he is revealed to be the tertiary antagonist of the game (secondary depending on the player's actions), revealing himself to be a mole for Cordis Die in Odysseus, where he will be either killed or detained, depending on the player's choices.

Salazar grew up in Nicaragua during Menendez's rise to power, eventually growing up to join the U.S. military. As part of J-SOC, he accompanied the team consisting of David Mason, Harper, Crosby and himself to an underground facility where they learned of suspicious activity that Raul Menendez was up to in Myanmar. Salazar also assists the team in infiltrating Colossus in Karma and Anthem in Pakistan.

During Cordis Die's assault on the U.S.S. Barack Obama, Salazar is revealed to be in league/association with Menendez, when he assists Menendez in taking over the Obama's control room first by letting him free in the interrogation room, and then by killing two guards (and Farid or Chloe Lynch). After his betrayal, he asks Menendez to spare Briggs' life, stating that the admiral is a good man, however the player is still given a choice to kill Briggs.)

If the player kills Briggs, Salazar shouts "You said no unnecessary killing!" (to which Menendez responds "I decide what is necessary!"). If the player only wounds him, Salazar thanks Menendez for sparing him, with Menendez saying he wanted Briggs to see the aftermath. As a third option the player can choose to do nothing. Doing so will result in Briggs attempting to attack Menendez, but is stopped by a blow to his head by Salazar and the game proceeds just as if you had chosen to wound him. After Menendez successfully hacked the U.S. satellite network controls the U.S. military drone fleet and just before he escapes in a FA38 fighter, Salazar surrenders without a fight after Chloe wakes up and sees the Celerium virus in the U.S. military computer and she will regain control of the U.S. satellite network by using one of the traces in the source of the transmission. (Depends of player's choice)

If Harper was killed by Farid in Achilles' Veil then Salazar will be taken into custody and never seen again. If the Strike Force missions are complete then he will survive and will stay in custody.

If Harper survives Achilles' Veil, he will pull out his Five Seven and summarily executes Salazar with a shot to the head.

If Harper was killed and the Strike Force missions are incomplete or if Briggs was killed, it is assumed that Salazar will be killed by the drone fleet when they destroy the Barack Obama.

Salazar appears in Call of Duty: Mobile and was added on June 27, 2020, during Season 7: Radioactive Agent as part of the Dystopian Day Featured Event. 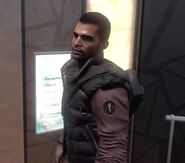 Salazar's death in "Odysseus" at the hands of Harper (player-determined).

Salazar wearing a helmet in Myanmar.

Salazar as seen in Call of Duty: Mobile.