Jeeps are military vehicles used for transportation or sometimes in combat during World War II.

Jeep in "Roads to Victory"

M2 Browning Machine Gun
In multiplayer, the Jeep can be used as a fast method of transport to get to objectives and take allies to key positions. The mounted M2 Browning can be used by a passenger to take potshots at enemy infantry and other light vehicles, but is ineffective against tanks. It can seat three people; a driver, a passenger and a gunner. Allies will often be appreciative of jeep transport and the driver can use the "fire" button to honk the horn to attract attention. Turns, as with any other vehicle of Call of Duty: United Offensive, are hard to make going at fast speeds, so braking before making a narrow turn is useful.

The "melee" button can be used as a crude handbrake for sharp turns. A good driver will be able to navigate through wreckage and small streets, such as those found in the multiplayer map Foy.

The Willy Jeep from the back.

In multiplayer, the jeeps are either broken or are not functional and are only good for cover. In single player, they came both in convertible and non-convertible version, as well as a desert in Tunisia for a brief scene (in which the player crashes into a German vehicle and must continue on foot) and Normandy camouflage type. They are seen destroyed in service with the Soviets, featuring the remains of a painted red star on the front lid.

The jeep appeared in most missions in the campaign. Its machine gun is usable in the missions "The Desert Fox" and "An Easy Detail".

"A Willy's (sic) Jeep modified by the British SAS with up to six Vickers K fast-firing MGs for assault and defense. Used in long-range patrols and airdropped for operations in German-occupied France."
— Call of Duty 3 description; SAS Assault Jeep.

There are two SAS jeeps, Vera and Lynn, which serve in prominent roles as the main vehicles of the British campaign. After the plane carrying them is shot down, Vera is lost in the drop, but she is later found again after a firefight at a house she was near. Sgt. Doyle, Cpl. Keith, and Pierre LaRoche promptly drive her to a rendezvous point where they meet with Isabelle DuFontaine. After finding Marcel of the Marquis Resistance and destroying three flak guns, Doyle, Keith, and LaRoche drive in Vera and eventually get stuck in the sight of a Panzer IV, but they are soon saved by Marcel riding in Lynn. Eventually, Doyle, Keith, and Maj. Ingram drive Vera into the fuel depot, but eventually, after narrowly dodging a speeding train, Vera crashes into a wall and is replaced by a stolen German Horch 1a for the rest of the British campaign. Lynn replaces Vera as the main driving vehicle for the mission "Hostage!". It is unknown what her fate is after the war.

In multiplayer, the Jeep will have a machine gun attached to it and drives into combat attacking the enemy troops. The jeep in Call of Duty 3's multiplayer is one of the three types of vehicles used in multiplayer. If the player puts the jeeps names together, it spells Vera Lynn, a British loveheart during the war. It is not uncommon for a player to drive a jeep to high ground and control the turret to create the ultimate camping spot. However, the jeep can easily be destroyed with a Panzerschreck or bazooka.

Willys Jeep in the bonus materials. 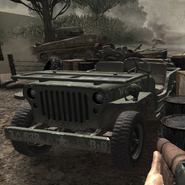 Vera. A British Jeep in Call of Duty 3.

Jeeps appear briefly in the mission "Blowtorch & Corkscrew" shortly after the player destroys the third Japanese bunker. Once the player's squad joins the Sherman Tanks, two parked jeeps can be seen in the area. However, they and the Shermans are quickly hit by Japanese mortar fire.

In the mission "Little Resistance" after the player is blown from the boat and starts to move towards the beach, one of the boats which has been hit will open its ramp and a Jeep will roll out. However, the driver is dead and his blood is splattered all over the windshield.

A Jeep is first seen in the level "Basic Training" where Sgt. Roebuck is seem arriving in the boot camp to check on the new recruits.

Jeeps appear in the missions Ambush and Operation Cobra which are drivable and have a shootable M2 Browning Machine Gun. They are also used as static props.

Daniels and Zussman chasing the armored train in S.O.E

An American Jeep during the Battle of the Bulge