"With his sights set on becoming a full-fledged Atlas Field Operative, Decker took a job in security to get his foot in the door. Decker's CO calls him a "highly motivated individual", which in Atlas talk means he's a royal pain in the ass. Competitive and driven, Decker's enthusiastic attitude has led to a few raised eyebrows during security briefings, several arguments on the firing range and a psych profile that may keep him from reaching his goals."
— Decker's biography

Jim Decker is one of the four main playable characters in the Exo Zombies in the DLC map packs Havoc, Ascendance, Supremacy and Reckoning. He is portrayed and voiced by Jon Bernthal.

Not much is known about Decker's life before working at the Atlas Corporation. What is known is that he attempted to join the army, only to be rejected due to his failing of a drug test. He then set out to become a field operative in Atlas, and joined in as a security guard to get started.

On one night, a zombie outbreak occurs, and he is called in to help the employees evacuate. However, he is then forced to run from the oncoming horde. He later arrives at a helicopter landing pad, along with three other Atlas employees, Oz, Lilith, and Kahn. The rescue Warbird is attacked by zombies, and crash-lands in front of them. Decker is then forced to cooperate with the other three in order to survive. In an attempt to escape, all four survivors retrieve their employee keycards, and use them to call in a second Warbird for extraction. However, as the Warbird approaches the facility, it is shot down by an oncoming orbital drop, leaving the four survivors stranded. They eventually make a last stand against the zombies, but are defeated. Atlas forces arrive and save them in the nick of time, then transport them to a facility located near a Burger Town restaurant.

"We got the high ground, what's not to like?"
— Decker in the Infection Outro

Sometime later, they recover and find themselves in the midst of another zombie infection. Not only do they have to fend off the undead, but they also have to rescue civilians trapped in the vicinity of Burger Town. The four survivors eventually find a way to activate the Burger Town mascot, Bubby, which either comes to life and aides them in battle, or just simply explodes. While doing this, they also unknowingly launch a missile. After doing this they are stopped on the roof of the Burger Town restaurant and are taken captive by Sentinal forces. Their leader, Lennox, points a pistol at them and claims one of the four must die. Oz is then executed in front of Decker and the other two. The trio are then taken to an Atlas aircraft carrier somewhere off the coast.

While on the ship, the team finds several diagrams depicting Oz as "Patient Zero", hinting at a possibility of Oz having been experimented on by the Atlas Corporation in the past. They also discover some data tablets, containing the journal of the ship's former captain. Having learned the truth about what happened, the team then decides to sink the ship by setting it to detonate. However, as they prepare for extraction, they encounter Oz, who has reanimated and become a zombie. 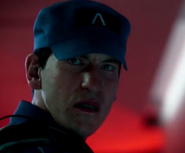 Decker with Oz, Lilith, and Kahn.

A full-body render of Decker's model from Outbreak.

A close-up render of Decker's model from Outbreak

Retrieved from "https://callofduty.fandom.com/wiki/Jim_Decker?oldid=2255080"
Community content is available under CC-BY-SA unless otherwise noted.