Soap and Price's dossiers marked as "Disavowed" in his flashback.

Soap leading the assault to rescue Prisoner 627 in "The Gulag".

Soap in a Pave Low

Soap taking down a Spetsnaz operative.

Soap in the MW3 campaign menu.

Soap being carried by "Yuri", seen through noclip

Soap with a gas mask. 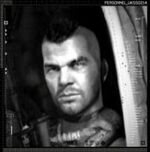 Wounded Soap in the Little Bird.

Soap with Ghost, Sandman and Price.

Concept art of Soap for the mission Cliffhanger.

Soap in Call of Duty Heroes

Soap as a playable character model in Call of Duty: Online

The McFarlane Toys' John "Soap" MacTavish action figure, based off of his Modern Warfare 3 appearance.
Add a photo to this gallery
Retrieved from "https://callofduty.fandom.com/wiki/John_%22Soap%22_MacTavish_(Original)/Gallery?oldid=2496326"
Community content is available under CC-BY-SA unless otherwise noted.