For other characters with a similar name, see John and Baker.

In Multiplayer, get 100 eliminations with Sniper Rifles.

"Reluctantly following in his father's footsteps, Baker enlisted and qualified as a Navy SEAL. He saw action in Operation Condor as a Scout Sniper. His temper never bothered Adler, who recruited him to help hunt down Perseus."
— In-game biography

Born in 1950, John Baker enlisted in the United States Navy in 1971 before qualifying for the SEAL program. Although enlisting and following his father's footstep wasn't his first choice, Baker thrived in the service and served two tour in Vietnam as a Scout Sniper.

In 1972, Baker was recruited by the Special Activities Division of the CIA for the Phoenix Program, a program designed to identify and destroy the Viet Cong in Vietnam and Laos.

After Vietnam, Baker took part in Operation Condor and was deployed in Argentina, Chile, Uruguay, Paraguay and Bolivia. During this time, he met Russell Adler who hand-picked Baker for the hunt of the rogue Soviet operative codenamed "Perseus".

Baker appears in Call of Duty: Mobile and was added on April 18, 2022 during Season 3: Radical Raid as part of the War Gamer Lucky Box.

The still used for the Operator Intro Thumbnail 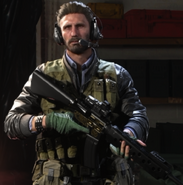 Baker as an operator in Warzone.