President of the United States

"Do not pray for easy lives, my friends. Pray to be stronger men."
— Kennedy in "Five".

John Fitzgerald Kennedy, abbreviated JFK, was the 35th President of the United States of America, from 1961 until his assassination in 1963.

He appears as a non-playable character in Call of Duty: Black Ops. In the single-player campaign mission U.S.D.D. he speaks personally with the player Alex Mason inside the Pentagon. 12 days after meeting Mason, John F Kennedy visits Dallas where he is assassinated.

He also appears as a playable character in the Zombies map "Five". His player indicator color is white. While negotiating with Cuba Prime Minister Fidel Castro along with Robert McNamara and Richard Nixon at the Pentagon, zombies invade. The four team up to fight off the zombies.

His username to log in into the CIA data system is jfkennedy with the password LANCER, which is his Secret Service callsign.

Kennedy in the conference room.

Mason aiming at Kennedy in a hallucination.

Alex Mason in Dallas on the day JFK was assassinated.

KennedyFive.jpg
Kennedy and McNamara in the cutscene of "Five". 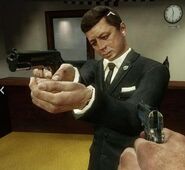 Kennedy in "Five".
Add a photo to this gallery

Retrieved from "https://callofduty.fandom.com/wiki/John_F._Kennedy?oldid=1896398"
Community content is available under CC-BY-SA unless otherwise noted.