Call of Duty Wiki
Register
Don't have an account?
Sign In
Advertisement
in: Call of Duty: Black Ops 4 Zombies Enemies

Jolting Jacks are skinny grey zombies that run on all fours, just like their regular counterpart. The feature that sets them apart is that they are surrounded by electricity and can shoot electric bolts from a distance. They usually sit on rooftops and shoot from above, but occasionally come down. The Jolting Jacks do not have a specific round, and instead spawn in with the regular zombies after the Pack-a-Punch machine is activated.

When killed, they will explode with a burst of electricity, similar to the rest of their variants. This burst does not deal damage to the player, however. 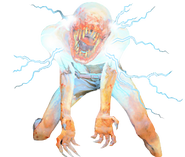 The icon used for Rush.