Spetsnaz Operative with a Pipe

Chief Petty Officer Joseph Bowman was a SOG operative who appears in Call of Duty: Black Ops. He was Woods' right-hand man. He appears in almost every mission played by Mason up until Payback, in which he is killed by a Spetsnaz Operative. He is voiced by and likened to Ice Cube.

Not much is known about Bowman's early life, other than the fact that he was born on November 10, 1940, in Atlanta, Georgia. His father was a World War II veteran, as he was his influence for enlisting in the Navy at the young age of 17. Bowman also attended Underwater Demolition Team school as a part of his training.

"Occupants leavin' their vehicles. Armed with shotguns!"
— Bowman to Carlos, Mason, and Woods.

Bowman fought alongside Alex Mason and Frank Woods during "Operation 40". During the planning phase, he met up with Carlos in a bar before having to fight through a police raid. Later, he infiltrated the compound of Fidel Castro. He separated from Mason and Woods after the initial assault, rejoining them after Castro's double is killed. He escaped Cuba on a transport plane after Mason jumped off to destroy the vehicles blocking the runway, allowing the plane safe passage.

"We've got a visual on Weaver. He's been takin' to the bunker south of the comms building."
— Bowman to Woods.

Years later, Bowman again fought alongside Mason and Woods in Baikonur to sabotage the Russian Soyuz launch. He infiltrated the facility with Brooks and joined with the other operatives. Disguised as a Russian soldier, Bowman led a pair of guards away from the comm tower to dispatch them, allowing Woods and Mason to storm the tower. Bowman and Brooks proceeded to rescue Weaver, who had been captured by Kravchenko. The operatives moved to the Soyuz launch platform to destroy the rocket. During their escape, Bowman presumably assisted Mason in the attempted assassination of Dragovich, but they were unable to confirm the kill after destroying his limousine.

In 1968, Bowman was deployed to Vietnam as part of the Studies and Observations Group. He again met up with Woods and Mason after a battle at Khe Sanh and assisted Mason during the Tet Offensive at Hue City, establishing contact with a Russian defector and helping Mason out of trouble. Bowman took part in a clean-and-sweep operation to root out local Viet Cong. During the Laos incursion, Bowman rode shotgun on Mason's boat, using a Grim Reaper to destroy numerous enemy positions on the river. He located the wreck of a Russian cargo plane, but found nothing other than a map and a China Lake grenade launcher. He helped defend the plane when Russian Spetsnaz tried to recapture the site, and was captured and given to the Viet Cong.

Bowman was held captive for about a week. During this time, Mason relates that Bowman had "given up". Bowman was forced to play Russian roulette by the VC Bookie, but instead he angered the Russian interrogator, sparking him to beat him to death with a pipe. When Mason and Woods escaped, they avenged Bowman's death by killing the Russian while he was trying to flee. However, he was not officially known to have died until after Mason's capture at Rebirth Island.

Bowman is survived by his fiancée, Angela, who had a son with him named William. William, through his investigation of Perseus, would eventually lead him to meeting Bruce Harris, Bowman's former colleague who survived the events of Yamantau. Harris, who was mistakenly captured by William and thought to be Perseus, gave William a bag containing Bowman's belongings. 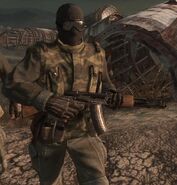 Bowman disguised as a Russian soldier in "Executive Order"

Bowman with Woods on a UH-1