View source
watch 01:57
Who is Joseph Turner?
Do you like this video?
Play Sound

Shot by a Waffen-SS soldier with a MP-40

"No mission too difficult! No sacrifice too great! Duty first!"
— Joseph Turner

First Lieutenant Joseph Turner is a character that appears in Call of Duty: WWII. He provides ammunition for the player and is a father to his men, often in battle with William Pierson, who is an antagonist to the squad.

Joseph Turner was born in Cambridge, Massachusetts in 1913 and went on to attend the United States Military Academy at West Point, graduating and receiving his commission as an officer in 1938. He rose to the rank of First Lieutenant and was allied with Second Lieutenant William Pierson in 1939. In February 1943, Turner participated in the Battle of Kasserine Pass alongside Pierson, who disobeyed orders to retreat and went to save his men who were trapped at the pass. Pierson's men died as a result of his actions, with the Axis powers scoring a win. Turner was there (or as stated by Perez) and wrote the Article 15 and demotion of Pierson, who became embittered and apathetic towards his platoon. After the event, Pierson was kept on the reigns by Turner, often watching him by the shoulder.

On June 6th, 1944, Turner and Pierson led a squad through the invasion of Normandy. The squad consisted of Private First Classes Ronald "Red" Daniels and Robert Zussman, Technician Frank Aiello, and Private Drew "College" Stiles. Despite heavy casualties, the squad pushed through the German defenses, clearing each bunker and destroying the artillery gun. After Pierson gave Daniels a cold welcome to the 1st infantry division, Turner gives the private a warm welcome, honoring his bravery and courage of finishing the objective and saving Zussman. After doing so, he comforted Daniels by telling him he will be alright, with the private agreeing so.

Joining forces with the S.O.E.

Having a briefing with Colonel Davis, Turner is informed of the Germans arming a train with V-2 rockets in France. Davis orders Turner and Pierson's to aid S.O.E. members Arthur Crowley and Vivian to stop it. At the train station, the platoon and allies are caught and battle their way to the train, successfully doing so by Daniels and Zussman driving a Kübelwagen in the front of it, derailing it. French Resistance leader Camille "Rousseau" Denis saves Daniels and Zussman, and returns them back to the group.

Turner and his platoon aid Rousseau and the S.O.E. in liberating Paris. Rousseau disguises herself to collect bombs from her informant, Fischer. Rousseau succeeds in the swap after killing Heinrich. The allies launch the assault after the bombs go off, liberating Paris as everyone celebrates.

Turner's platoon is pinned down by enemy fire in the German city of Aachen. They request tank support from Augustine Perez's tank unit. After they are saved by Perez, Turner resumes their objective to Hotel Allendorf, the last German stronghold in the city.After battling German soldiers, they arrive to the hotel and clear the hotel of German soldiers. After clearing the hotel, they decide to investigate the basement of the hotel. Turner hears a child's voice and asks Daniels has some candy. A German little girl named Anna runs to Daniels and leads to the discovery of German citizens who fled to hotel. Turner decides to evacuate the German citizens and orders Daniels and Aiello to get the abandonOpel Blitz. Daniels and Aiello later arrive and place the German citizens on the truck. A women namedErica forgets to bring her sister Anna. Daniels decides to go get the girl. Later, more German soldiers arrive at the hotel. Turner squad and other soldiers fight the German soldiers. During, the exchange of gunfire some bullets hit the truck and kill one of the citizens. The truck leaves. Later, In a field headquarters, Davis is seen reprimanding Pierson and Turner that his squad was to take the hotel and not evacuate citizens. Pierson tries to take the blame, but Turner admits he was the one who gave the order.

"No sacrifice too great. Go."
— Turner's last words to Pierson.

After the Tiger II tank is destroyed and two of the German tank crew personnel are seen escaping the tank and are killed by Turner, he then is shot in the ribs by the commander of the same tank, when trying to help Daniels up. Daniels pulls him back to one of the trenches but Turner tells him and his squad to fall back so that he can give them covering fire. He barely and desperately stands up and fires his Thompson but he's shot to death by another German soldier, lying lifelessly with his eyes open.

Pierson: "Turner is dead!"
Daniels: "Then make that mean something! No sacrifice too great!"
— Pierson and Daniels about the concept of sacrifice.

Pierson led the squad, making Daniels his second-in-command in Belgium. Despite Turner's pleas for Pierson to take care of his men, he becomes colder and gains the philosophy of "Pierson's world". Red snaps Pierson out of this before the battle of the Rhine, leading to an Allied victory and saving Zussman from the German labor camp. In the Epilogue, it's revealed that Red named his son after Turner, honoring his sacrifice on the hill.

"Always lookin' over Pierson's shoulder is Lieutenant Turner. He's got 'im on a tight leash."
— Red describing Turner in the opening cinematic.

Joseph Turner was a father to his men, showing compassion and loyalty to them above all else as they push through Europe. Turner's relationship with his squad as warm, as his platoon respected him for his care unlike the apathetic and strict Pierson. In addition, Turner always put the life of others over the missions, doing what was right rather than focus on the mission. This is noticeable in "Collateral Damage" when trying to save German civilians, and in "Hill 493" when learning that many were killed on Pierson's watch.

Turner's relationship with Pierson was strained, as the two had known each other before the start of the war. After Turner wrote Pierson's demotion, the two were hostile and pushed each other to their limits. That being said, the two respected each other, as Pierson told Turner it was an honor to serve with him before the latter's death.

Turner was heroic and sacrificing, as he believed in the right thing no matter. His compassion and morality left a strong mark on Daniels, as the private gained a black and white view during the war on saving others and having respect to the enemy. Turner's sacrifice showed his true loyalty was with his squad, believing in life should be cherished than orders themselves.

"None of us could have prepared for that. But you came through when it counted. {...} You'll be alright, son."
— Turner to Daniels at the end of "D-Day". 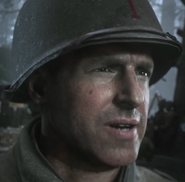 Turner's dossier (top left) along with Pierson and Zussman's.

Joseph Turner giving cover fire to help in the retreat in Hill 493. 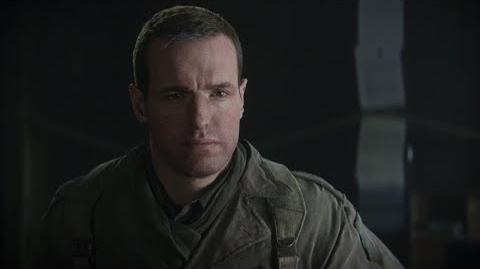