The Care Package is airdropped via C-130 Hercules and gives the player heavy duty body armor along with an M60E4 Light Machine Gun, an MP412 revolver, a Smoke Grenade, and a Frag Grenade. Players wearing the armor will have enhanced damage resistance (only receiving 8% damage), along with the perks Scavenger, Quickdraw and SitRep, allowing almost infinite ammunition, at the expense of severely limited movement (at 65% of the usual speed). Players will receive the pro benefits if they have it unlocked in Create-A-Class. The total amount of health when wearing the Juggernaut armour ranges from 1250 to 1750 health. Players with this suit will appear as a diamond on everyone's map in real time, even if the enemy team's radar has been jammed.

The Juggernaut killstreak is incredibly durable and can often survive dozens of shots from most weapons in the game. Due to Scavenger, Juggernauts can be guaranteed an almost infinite ammunition replenish, making them a force to be reckoned in situations where the enemies cannot properly coordinate and neutralize one. Quickdraw sharply reduces ADS time, so one can take out enemies without much problems, while SitRep protects the Juggernaut from explosive equipment. The EOD uniform is incredibly durable (being immune to a stick from a Semtex). requiring concentrated firepower from multiple enemies converging on the Juggernaut in order to destroy it. Lone players who try to take on a Juggernaut will need to either aim for its head or use the knife, leaving them vulnerable against retaliation. The Juggernaut is also able to regenerate Health like a normal player.

The Juggernaut is very slow, and alert team members who communicate often can afford to maintain their distance while staying behind solid cover to avoid said enemy, and coordinate with snipers to eliminate this threat. It is also extremely vulnerable to Stun Grenades (as Juggernauts would be in Survival Mode), slowing them down to a near stop and severely hindering their ability to turn (and fight back). Predator Missiles or an AC-130 105mm cannon shot can kill a Juggernaut in one direct hit. Five melee strikes, four throwing knife or six shotgun blasts are generally lethal against a Juggernaut.

Furthermore, the Juggernaut will show up as a diamond on all players' radars, even if the enemies' HUD is jammed.

The care package holding the suit itself is dropped in via a C-130, and as such, it takes significantly longer for it to come in compared to a normal Care Package, along with potentially alerting the enemy team where it is being called in.

The C-130 Hercules, the plane that air-drops the Juggernaut armor.

An unused killstreak icon for the Assault Juggernaut. 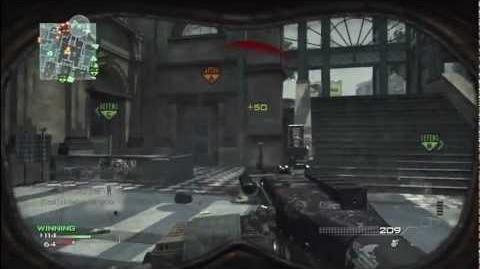 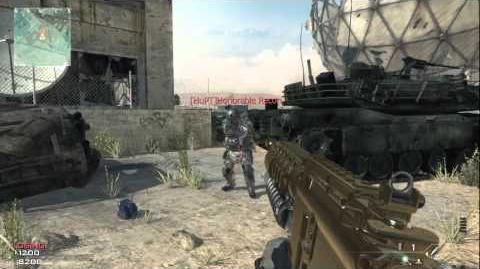 The Juggernaut returns in Call of Duty Online as a killstreak. It is unlocked at level 44 and available for use by getting 11 (10 with Hardline) kills without dying.

Unlike Modern Warfare 3, when activating it, the player will instantly become a Juggernaut and receive a Desert Eagle and a special variant of MAG43 called the MAG43 Juggernaut, which has the same performance as M60E4 in Modern Warfare 3 since there is no M60E4 in the game.

In addition, the player's original perks will be substituted for Scavenger, Steady Aim and buffed Flak Jacket. Player will also appear on the minimap in real-time.

Due to the Flak Jacket that Juggernaut has, launchers like RPG can no longer kill Juggernauts with one direct-hit shot.

A Juggernaut wielding a Desert Eagle on Summit.

The Juggernaut returns in Call of Duty: Ghosts as an 11 pointstreak in the Assault Strike Chain. Similarly to Modern Warfare 3, a unique care package is airdropped via C-130 Hercules. Once obtained, the player will receive a minigun similar to the Death Machine, a P226, and a Canister Bomb. The player will appear as a diamond on everyone's map in real-time. While equipping the Juggernaut suit, the player can only collect ammo for the P226. Also, unlike Modern Warfare 3, the player's health does not regenerate while operating the suit for balancing. An AI version can be called in with the Loki pointstreak; the AI Juggernaut's kills will add to the owner's pointstreak and can help the owner potentially earn a K.E.M. Strike after 25 (24 with Hardline) total non-killstreak kills. The AI Juggernaut is oftentimes a killing machine, having near-perfect accuracy at all ranges and is a serious threat.

Once again, the Juggernaut is extremely resistant to gunfire and explosions. Without proper coordination or suppression from the enemy team, the player can rip through enemies and push the enemy back into their spawns or clear the way to capture objectives. Like the Death Machine, the minigun can only be fired from the hip and is effective at close and medium ranges. The Canister Bomb is effective as it can be used to clear rooms or objectives without risking lethal gunfire in close quarters combat. Because the suit is slow and visible to everyone, it is best to coordinate with the player's team, if possible, and stay with them as the player's teammates can provide backup or provide bait for easy kills.

The Juggernaut suit is extremely slow and is visible as a diamond on everyone's minimap in real-time. Enemies can easily swarm the Juggernaut with proper coordination. Close quarters combat is not recommended, as the Juggernaut cannot maneuver very quickly and they will take damage extremely quickly. Concentrated fire and explosions can easily swarm them and kill them in a matter of seconds. Concussion Grenades severely hinder their movement and bring almost to a complete standstill. Thermobaric Grenades can weaken their armor and do severe damage to their suit. Sentry Guns and the I.M.S. or any high pointstreaks can also do lethal damage to the Juggernaut armor.

The care package holding the suit itself is dropped in via a C-130, and as such, it takes significantly longer for it to come in compared to a normal Care Package, along with potentially alerting the enemy team where it is being called in. In Ghosts, all care packages containing "heavy" killstreaks like the (Maniac, Juggernaut Recon, Death Mariachi, Michael Myers, Predator) are shaped differently from regular care packages, being much thinner and shorter crates with four small legs on it. Due to this design, this type of care package can easily get stuck on objects that a normal care package would otherwise just roll or fall off of upon landing on it, potentially wasting a hard-earned Juggernaut by having it land out-of-reach if the player's placement with the smoke marker is not careful.

Juggernaut firing a minigun in Call of Duty: Ghosts.

A Juggernaut firing on the map Dynasty.

First person view of the Juggernaut in Call of Duty: Ghosts.

The Juggernaut returns in Call of Duty: Modern Warfare as a killstreak and is identical to its previous versions, but one of three heavy metal tracks will be played as soon as the Juggernaut suit is used, which can be heard by the player and other players when they are close enough. The music can be disabled, which is recommended since it can drown out important audio cues.

Much like in Ghosts, the Juggernaut does not regenerate health, but compared to the previous games, their health has been greatly increased to the point that it takes almost ten hits to the body from most rocket launchers to kill the Juggernaut and Sentry Guns do minimal damage towards them. While playing as a Juggernaut and taking damage, the visor will begin to visibly crack and eventually begin to shatter giving players a rough estimate of remaining health.