For the perk in multiplayer with a similar effect, see Juggernaut (perk).

"Anything that makes me harder to kill, okay by me."
— Robert Englund

Once purchased during a game for 2500 points, it increases the players health allowing them to take more damage from enemies. Since it's introduction in Verrückt, it's been a highly desirable addition to most player's arsenal in every game.

First introduced in Verrückt in Call of Duty: World at War, and is based on the Juggernaut perk from Call of Duty: World at War's multiplayer game. It was one of the original four Perk-a-Cola's introduced into the Zombies game mode. Juggernog's vending machine was based on classic soft drink vending machines, with Juggernog resembling an old Coca-Cola machine.

Once it's purchased, it'll increase the player's health from 100 points to 250. This increases the amount of damage the player can take from opponents as follows:

As it increases player health, it's generally one of the most used perks and players often prioritize getting this perk first, particularly as players get to higher rounds as zombies start to increase in both strength and numbers.

Call of Duty: Black Ops Cold War introduces an upgrade system for the perks. At its base tier, it increases hitpoints by 50 points. The Tier 1 upgrade reducing the duration of status effects, such as the toxin damage caused by Plaguehounds, by 50%. Tier 2 increases the amount of Armor that Armor Plates replenish by 25% and Tier 3 increases health by 100 points. At Tier 4 the player's armor durability is increased by 25%, and at Tier 5 the player is not downed on a lethal hit but instead has their armor depleted and health reduced to 1.

Unique to the original World at War versions of Verrückt and Shi No Numa, Juggernog functioned differently on those two maps. Instead of the typical system as is used today of increasing the player's health to 250 points, the player's health regeneration rate is massively boosted, with the duration from damage to full health reduced significantly, and the rate at which health is regenerated boosted. This unique system allows the player to survive far more more hits than the normal four (or five, as seen in some versions of Zombies). A player can be attacked by a single, or even multiple zombies well over the usual limit and will not die as long as they do not get hit too many times at once. A single zombie will never be able to kill the player on these maps, as the zombie will not be able to hit quickly enough to overcome the health regeneration rate.

This perks icon on the player's HUD is a red shield, with a white cross and a red bullet crossing through it. The Juggernog vending machine is also red and white, it's a tall and thin machine. On the front, the quotes "Drink Juggernog" and "10¢" can be seen along with "That's a good nog!" and "Made with real eggs!". On the right side, the quote "Take a tug on that sweet, sweet jugg." can be seen along with a faded bloody handprint below it. And on the left, "ice cold" is seen. On the top, a circular sign with the Juggernog HUD icon is on it. The machine also has two wheels on the back. It's dispensed in a clear glass bottle, with the drink itself being red in colour. The perks icon is on a sticker on the bottle.

This machine dispenses cans rather than bottles. The stickers on the can be read, revealing the nutrition facts of the beverage. One can of Juggernog contains: 1000 calories, 70g of total fat, 45g of sodium, 5000g of total carb, 90g of sugars, and 400g of protein.[1] The ingredients list can also be seen, revealing it contains: Carbonated milk, powdered crocodile eggs, spinach juice, pure gumption, and is fortified with iron.[1]

Shadows of Evil changes the jingle from the one normally used. This version is a 1940's, big-band swing style jingle instead with the same lyrics.

There is also a cut jingle that never made it into the game. The backing track of this unused jingle comes from a stock track called "Wending My Way"[3]. The jingle is present in the files of Verrückt:

The Juggernog machine in Verrückt. 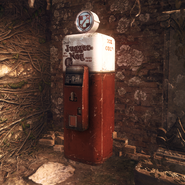 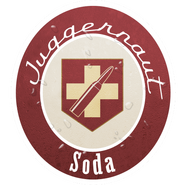 The Juggernog logo. Note how it says Juggernaut Soda instead of Juggernog.

Juggernog as it appears in Call of Duty: Zombies.

Uncapping the Juggernog bottle on the Nintendo Wii.

Drinking Juggernog on the Nintendo Wii.

The bottle in Call of Duty: Zombies.

Uncapping the bottle in Call of Duty: Zombies.

Drinking from the bottle in Call of Duty: Zombies. 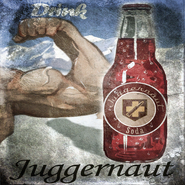 The Juggernog poster seen in Verrückt.

The Juggernog mini-fridge that comes with the Juggernog Edition of Call of Duty: Black Ops III (seen on the left).

The Juggernog minifridge as it appears in real-life.

Juggernog HUD Icon as seen in Shadows of Evil. 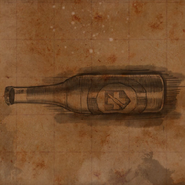 A drawing of a Juggernog bottle as seen in the Zombies Chronicles timeline poster.

The Juggernog Machine as seen in Call of Duty: Mobile. 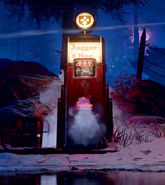 The Juggernog Machine as it appears in within the Dark Aether in Call of Duty: Black Ops Cold War. 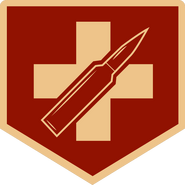 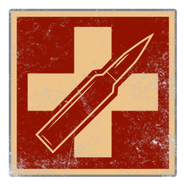 Back of the Juggernog can, showcasing nutritional information