Juggernog is an obtainable perk in Call of Duty: World at War and Call of Duty: Black Ops that is featured in the Zombies game mode. This perk increases the amount of hits it takes to down the player, making it one of the most valuable perks amongst players.

This perk costs 2500 points to buy, and tends to be a players first choice of perk. Players should be careful while purchasing this perk as it's effects aren't added until the Juggernog icon is added to the screen, which means they can go down in 2 hits while drinking the perk.

﻿Juggernog is considered by many players to be by far the most important and useful perk. It allows players to survive up to four attacks from zombies in quick succession, instead of the default two. This allows players to comfortably spend more time in vulnerable situations, such as reloading and drinking perk-a-colas. 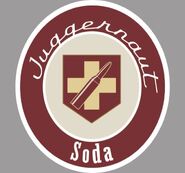 The Juggernaut logo from the game files. Notice it says Juggernaut instead of Juggernog.
Add a photo to this gallery
Retrieved from "https://callofduty.fandom.com/wiki/Juggernog?oldid=916711"
Community content is available under CC-BY-SA unless otherwise noted.