"Just Like Old Times" is the seventeenth and penultimate mission of Call of Duty: Modern Warfare 2 and Call of Duty: Modern Warfare 2 Campaign Remastered. With most of Task Force 141 eliminated and nearly out of allies that they can trust, Captain Price and Captain MacTavish resolve there is nothing left to do but neutralize General Shepherd. Now labeled war criminals and wanted fugitives, the duo embark on a suicide mission to infiltrate Shadow Company's command base with one goal only: Kill Shepherd.

The mission starts with Nikolai telling Price he'd be ready to pick them up in three hours. Price tells Nikolai not to bother, as this would be a "one-way trip." They are in a sandstorm while the player (playing as John "Soap" MacTavish) and Price are hiding in the sand. The two then proceed toward a ridge, and ambush a group of Shadow Company soldiers. Soap hooks up on a bridge and rappels down with Price. The two take out the two guards below them standing in front of the cave and then head inside.

They later are forced to hide as a patrol of soldiers check out what happened to the group they took out earlier. They sneak past a group of soldiers having a meeting. Price warns Soap of two soldiers with tactical lights coming down the stairs. They kill them and the two continue. Upstairs, Price stabs a soldier before he notices two more are behind him. Soap and Price learn that Shadow Company soldiers are about to breach the door.

The two quickly take out the group as they come pouring in. Price tells Soap to take a Riot Shield for cover and walk along the catwalk while Price takes out the group. They later learn that Shepherd is being evacuated. They take out several groups of soldiers before proceeding to a door that Shadow Company soldiers have locked.

The duo then breach the door and kill all the soldiers behind it. After the room is clear, Shepherd notifies the soldiers in the cave that the site has been breached and that he is going to set off explosives inside the cave to attempt to kill Soap and Price. Price and Soap quickly hack the door controls so that they can get out before the explosions go off.

During their escape, Soap is injured, but quickly recovers. Shepherd then calls in an artillery strike, "danger close," in another desperate attempt to kill the two, but they still manage to survive and the Shadow Company troops ahead of the duo get stunned or killed. Price comments, like Corporal Dunn had earlier in the campaign, that Shepherd doesn't care about danger close. Price and Soap then proceed to the Zodiacs that Shepherd mentioned earlier.

The walkthrough is guided on Veteran difficulty. On Regular and Recruit, you do not have to exactly follow directions said below.

You start at watching Price. Follow Price until he tells you to stop, as a patrol is up ahead. With the Intervention, fire on the two soldiers to the right under Price's mark. Once Price tells you to fire, shoot the two soldiers and then the dog before sliding down. Deal with the remaining two soldiers with any weapon, as you can easily kill them all. Search the bodies, and swap out the Intervention if you want because close-range fighting will occur soon, and you certainly want a good weapon to kill enemies later on.

Grapple onto the rails. Remember to brake occasionally, otherwise you will fall off the cliff and die. Quickly stab the soldier in front of you, and stay on your Vector ACOG Silenced weapon. Or, if you can, a suppressed MP5K can be useful to help you get through this. Quickly navigate the tunnel, and a soldier will appear. Do not shoot at him until you are prompted to do so. Quickly sneak past him and hide in an alcove, and let a large patrol pass through. Then take him out, and carefully move around the large group of enemies relaxing, following Price's orders. You will need to get rid of three enemies later on, so make sure you have your Vector on and kill them. Another soldier is waiting at the top of the staircase. Let Price deal with him.

If you do plan to kill the enemies, be very careful. However, upon clearing the cave you are provided with many free weapons in the room and the soldiers themselves. In the large room there are a few ACRs, two AT4s, and some AA-12s. The enemies have various items, and if you are lucky, one of them may have a SCAR-H with the Thermal Sight attachment, which will greatly help you in the level.

Head into the steam room, and the room will get dark. Many soldiers will breach the steam room, so quickly take the two inside out. Once the door is breached, try to find a spot where you won't get hit a lot. Otherwise, you can throw all of your grenades at them (throw a frag then a flashbang, this grenade combo easily wipes out the majority of the breachers). You can easily regain your thrown grenades from the dead soldiers and flashbangs on the catwalk. As you head to the catwalk, temporarily swap out one of your weapons for the Riot Shield, as you will need it. Walk onto the catwalk and head towards the enemy soldiers. Price will take them out one by one.

As you head to the second cave, swap to your main gun. Look to your right, and you will see two rappelling ropes. Six soldiers will drop down from them; three on each rope, and three have Riot Shields with a submachine gun. Throw grenades at them, or let Price kill them. As you get deeper inside, soldiers will drop down from ropes. Quickly take them out, otherwise they will head towards the smoke area, which can pose a problem.

If you haven't gotten or picked up a thermal sight weapon, there are four SCAR-H Thermal Sight guns laying on your side. Use them to take out all the enemies hiding in the smoke, watching your flank as a few soldiers may come from that direction. Once all the enemies are killed, don't breach the door yet. Search the area thoroughly before you breach. Once you breach, look to your right quickly as a soldier is attempting to kill you with a combat knife. Take him down quickly, and kill the other four soldiers in the room. Shepherd begins the detonation, so head to a computer and quickly override the door controls when prompted.

As you leave, you watch as Shepherd calls in an artillery strike to kill you two. Luckily, you are spared from the damage. Swap out one of your guns for the various AT4s lying around, as they will help. As you reach the other side, two helicopters that both deploy soldiers will appear. The one without appears earlier, so get the AT4 and shoot it down quickly to avoid enemy reinforcements. Grab another AT4 and shoot the other helicopter down too to avoid the soldiers from coming down and killing you. Four soldiers will then arrive from a cave, so kill them and go inside the cave. The mission then ends. 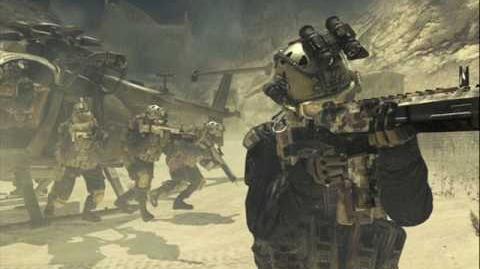 John Price about to stab a Shadow Company soldier.

) - Obtained by beating "Just Like Old Times", and "Endgame" on Veteran.