The Volkswagen Kübelwagen (short for Kübelsitzwagen, meaning "bucket seat car") was a military vehicle designed by Ferdinand Porsche and built by Volkswagen during World War II for use by the German military (both Wehrmacht and Waffen-SS).

In the original Call of Duty, Kübelwagens are seen extensively and are highlighted during the American mission, "Normandy Route N13". As Private Martin, the player not only must help Private Elder and Sergeant Moody evade and destroy pursuing Kübelwagens during a car chase, but must also ride with them in a commandeered Kübelwagen later in the mission. They also appear in the British level, "Eder Dam Getaway", as Kübelwagens and Opel Blitzes pursue the fleeing Sergeant Evans, Sergeant Waters, and Captain Price. They appear in the expansion pack, United Offensive as well.

A Kübelwagen in Call of Duty.
Add a photo to this gallery

In Call of Duty 2, Kübelwagens are a common sight during the British North African campaign levels such as Outnumbered and Outgunned and Retaking Lost Ground, and are painted in desert tan to match their area of operation. On these Kübelwagens, the symbol of the German Afrika Korps can be seen painted on the front doors. They are mostly seen parked throughout the levels, but in Outnumbered and Outgunned, there is an instance in which Captain Price, Private MacGregor and Sergeant Davis flee on foot after abandoning their stolen Sdkfz 222 and are quickly confronted by a group of Wehrmacht soldiers driving up in a Kübelwagen. Destroyed Kübelwagens are present in the American campaign.

A Kübelwagen from Call of Duty 2.

The Kübelwagen makes its first appearance in the mission "Baptism By Fire", where it is inside the last hangar,with two other half track and a truck,though,it is not a destroyable. Later, in the mission "Tankers", the player has two option, to let it get away or to destroy it to avoid reinforcement. In the mission "The Dragon's Teeth", a Kübelwagen is destroyed from mortar fire just next to a Sherman tank, which is also out of action, near the Siegfried line. It has several medical packs and can provide cover from a MG42.

"The Kubelwagen (sic) was designed as a compact, light military transport vehicle. Nimble, reliable and easy to manufacture, over 55,000 served the Geman military during WWII"
— Call of Duty 3 description.

Kübelwagens are seen as static props throughout the game.

Kübelwagen in Call of Duty WWII 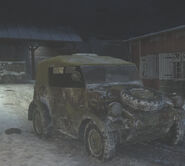 Kübelwagen in Ambush with roof in Call of Duty: WWII
Add a photo to this gallery
Retrieved from "https://callofduty.fandom.com/wiki/Kübelwagen?oldid=2452687"
Community content is available under CC-BY-SA unless otherwise noted.