The K.E.M. (Kinetic Energy Missile) Strike is a 25 Pointstreak (24 with Hardline) that appears in Call of Duty: Ghosts. Similar to the Tactical Nuke and M.O.A.B. from Modern Warfare 2 and 3 respectively, once it is called in, a ten-second countdown timer begins and upon reaching zero, a brief slow-motion scene will occur and it will kill all the enemy players simultaneously, as well as change the terrain and layout of Strikezone and Ignition and make the map dark and dusty. The K.E.M. Strike also leaves an EMP effect afterwards, similar to the M.O.A.B. making killstreaks useless for 60 seconds, and gives the user's team double XP for the rest of the game. Enemy pointstreaks that are present on the map will be destroyed, including Odin, Loki, Care Package(s) and Sentry Guns. Unless its received from a Field Order, multiple K.E.M. Strikes cannot be earned in a single life. However, two K.E.M. Strikes can be earned in one life only once: one from the traditional 25-pointstreak, and another from a Care Package in Strikezone only.

In addition to being a pointstreak, the K.E.M. Strike is used with the Predator Field Order reward on the map Ruins. Upon taking enough damage, the player will drop into a second chance position, and will activate a K.E.M. strike, killing all enemies. If the Predator takes too much damage in this state, the K.E.M will be detonated prematurely. It is also a Field Order in the map Strikezone and can be earned multiple times from the Slot Machine Field Order on Showtime in the Nemesis map pack. 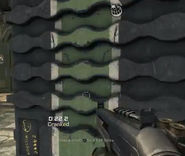 The K.E.M. Strike in a Care Package. This icon was a placeholder before the reveal.