"Attack dog that can be commanded to either follow you or patrol a designated location."
— Description

The K9-Unit spawns an attack dog named Juneau that will hunt down and eliminate enemies with 1 bite. Once active, she will follow the player around and eliminate nearby enemies by default. She can also be put into Patrol mode, which will make the dog protect a certain area of the player's choosing.

Juneau has a significant amount of Health Points. To combat Juneau, Specialist abilities such as the 9-Bang and Grav Slam are effective, however situational. 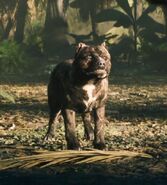 "Call in a military dog to track an enemy by scent and attack them automatically."
— Description.

The K9 Unit returns in Call of Duty: Mobile as an Operator Skill. It was added as part of the Season 5: In Deep Water update.

Like its Black Ops 4 counterpart, the K9 Unit kills in one bite. However, it is much weaker and easier to combat. It lacks the patrol ability, and will simply run around the map, attacking any enemies it detects.