For the successor, see KAP 45.

· Automatic (SP, MP, ZM)
· Semi-automatic (in One in the Chamber, and some variants in campaign)

The KAP-40 is used by the Mercs as a sidearm. KAP-40s are scarce throughout the campaign. The KAP-40 is unlocked for the player's use following the completion of "Fallen Angel", and equipped with a Suppressor is the recommended secondary weapon in the mission "Karma". One with a Reflex Sight is used to dispose of the Mercs on the dance floor of Club Solar during a slow-motion sequence later in the mission. The player can complete a challenge for this mission by obtaining five headshots during this sequence.

In "Cordis Die", Section has a KAP-40 but loses it during the crash; it is picked up by Johnson, who dies afterwards. It is also used by LAPD officers, whose KAP-40s seem to be restricted to semi-automatic use.

At the end of "Judgement Day", Section will take a KAP-40 from the corpse of a Merc and use it to kill two other Mercs who are protecting Raul Menendez, one of which may be DeFalco if he has survived up to that point.

The KAP-40 is also used in the Strike Force missions by the SDC as a sidearm, and by the SEALs as a default sidearm. One is given to the player in "Dispatch" to kill Tian Zhao.

In Multiplayer, the KAP-40 is unlocked at level 43, alongside the Ballista, and is fully automatic, outside of One in the Chamber, where it is semi-automatic instead.

The KAP-40's damage profile makes the KAP-40 hit hard up close, but not as hard at medium to long range. The KAP-40 is not intended to be useful at longer ranges. While it can be used at such ranges, it'd be unwise to engage with the KAP-40 beyond 21 meters.

The KAP-40's big selling feature is a high rate of fire. The KAP-40 is the only pistol in its class that is fully automatic, and it fires at 937 RPM, the same rate as the MP7, Vector K10, Type 25, and QBB LSW. It's a very high rate of fire, and in tandem with the three hit kill up close, it makes the KAP-40 an extremely competitive weapon in CQC. Compared to the SMGs, the KAP-40 either deals more damage up close or fires faster, making it a worthy choice for those who want an advantage against SMG users in close range.

The KAP-40's accuracy is pitiful. The iron sights are clear as day, but the recoil is extremely heavy. The KAP-40 has a very heavy vertical kick, exacerbated by a high rate of fire. Thankfully for the KAP-40, it has the highest centerspeed of all the pistols, with 1500 centerspeed, although such a value is just average. Users will have to get used to a straight upwards, heavy recoil, one that will need to be counteracted.

The KAP-40's magazine capacity is the second best in the pistol tier, at fifteen rounds per magazine. Although this is large for a pistol, the KAP-40 essentially acts as a Machine Pistol, and in this regard, the KAP-40's magazine capacity is small. The KAP-40 will chew through ammo incredibly quickly thanks to that fast fire rate. Thankfully, reloads are incredibly quick to compensate. When spawning in, the KAP-40 user gets sixty rounds total (fifteen loaded in the weapon, 45 in reserve).

The KAP-40 has the standard assortment of attachments. The Reflex Sight for pistols is perhaps best used on the KAP-40, as the KAP-40's reflex sight isn't mounted on a slide, like with the Five-Seven, Tac-45, and B23R, and it can be used at medium ranges, unlike the Executioner. Still, the iron sights on the KAP-40 are excellent, and there are better attchments on offer.

Extended Clip is a very attractive option on the KAP-40, expanding the KAP-40's magazine capacity to twenty rounds, and boosting the starting ammo loadout by 25%. It can be easy to either run out of ammo or run the magazine dry with the KAP-40, and as such, this attachment is much appreciated, even if it makes reloads slightly longer.

The Laser Sight makes the hip-fire spread 37.5% tighter, making hip-fire much more precise and effective out to a longer distance. The KAP-40 can make great use of the Laser Sight due to its fantastic hip-fire performance.

FMJ, as previously mentioned, increases the KAP-40's penetration power, but it also increases the amount of damage the KAP-40 deals to Scorestreaks. This allows the KAP-40 to shoot through thicker surfaces, as well as destroy scorestreaks like Guardians and Sentry Guns more efficiently. This is not what the KAP-40 is geared towards doing, and many are best left casting this attachment to the wayside.

Fast Mag makes the KAP-40's reloads even quicker. The fast reload takes 1.012 seconds normally, or 1.248 seconds if the magazine is empty. In either case, the KAP-40 will reload cancel in 0.6 seconds. This makes reloads absurdly fast, but some may consider such a quick reload to be overkill, given that the KAP-40 already has a lightning fast reload.

The Suppressor reduces the KAP-40's range by thirty percent, making the KAP-40's three, four, and five shot kills end at shorter ranges. In return for the lower range, the KAP-40's muzzle flash is heavily reduced, and the user does not show up on radar when firing. The KAP-40 is one of the better pistols to fit with a Suppressor, as it has the high rate of fire to make up for the lacking damage. However, the Supppressor is not a good choice for those who don't need its stealth benefits.

"The KAP, an automatic pistol with the recoil system of a rifle? The designer was indecisive and has created a sub-par weapon!"
— Marlton Johnson, when obtaining the KAP-40 from the Mystery Box in Green Run.

The KAP-40 appears in Zombies, available from the Mystery Box for 950 points. It has a 12-round magazine and a high rate of fire with 96 rounds in reserve. Its usefulness drops after early rounds because of its low reserve ammo and small magazine. When Pack-a-Punched, it becomes the Karmic Atom Perforator 4000 and gains a 15-round magazine. It starts out with no attachment and can be Pack-a-Punched again for a Fast Mag. However, its usefulness is questionable, as the Karmic Atom Perforator retains its predecessor's low damage and low ammunition capacity. Even so, it can be used to provide more useful cover fire while downed. In the game mode Turned, it is the fifth weapon to be obtained if the player is a human.

The KAP-40 in first-person 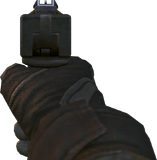 Render of the KAP-40

A SEAL assassinating Tian Zhao with a KAP-40

A holstered KAP-40 can be see on the "Immortal" outfit for the female Player character in campaign mode. It is purely cosmetic and cannot be used by the player.

A holstered KAP-40 can also be found on Ultimis Nikolai's player model along his belt throughout Zombies Chronicles. This is also completely cosmetic and cannot be used by the player. The KAP-40 can be obtained using Console Commands, using the same stats as in Black Ops II, firing in full auto and using 12 and 20 round magazines in multiplayer and Zombies. but when the melee button is pressed, the player will use it to pistol whip an enemy. But This time, When Extended mags, The Magazine's appearance changes to a drum magazine that holds 32 rounds.

The holstered KAP-40 above the grenades.